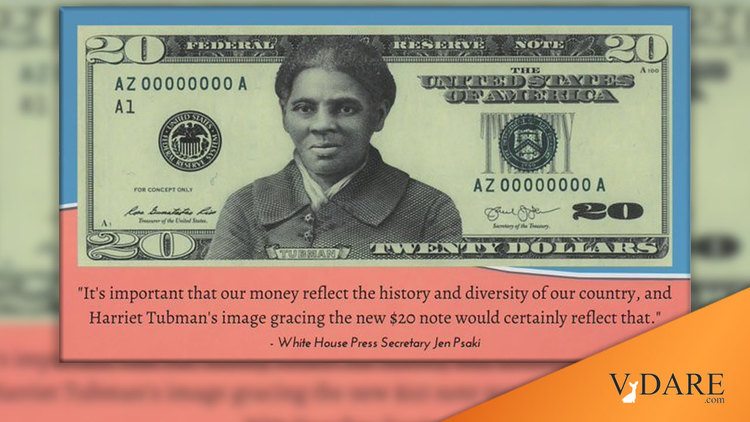 Harriet Tubman: Who Started The Myth, And Why?

White House Press Secretary Jen Psaki stated. “It’s important that our notes, our money … reflect the history and diversity of our country… Tubman is a “role model for leadership and participation in our democracy.”

As Greer succinctly demonstrates, this is ludicrous:

Jackson is one of the most consequential figures in American history. He was a war hero, a conqueror, a genuine populist who fought for the people against elite interests, and a great president. He embodied the hard-fighting Ulster Scots who settled the frontier and triumphed over Indian savagery. Outside of the Founders, hardly any Americans can claim more importance than Jackson. Harriet Tubman certainly can’t compare.

And he displays a classic specimen of the anti-White hatred which is driving this vandalism:

“Jackson was a notorious racist, a slaver who as president was responsible, among other things, for the Trail of Tears, in which thousands of Native Americans died as they were forcibly pushed west. Tubman, on the other hand, is one of the greatest heroes America has produced.”

Greer goes on the demonstrate the Harriet Tubman story is a myth so flimsy that even Feminist/Leftists scholars are nervous of it, citing Harriet Tubman: the woman, the myth, the legend muddied by $20 bill plaudits, by Jamiles Lartrey,  Guardian, April 24 , 2016 which is packed with their quaverings. He further cites James M. McPherson's seminal (but polite) debunking essay The Moses of Her People, The New York Review, March 11, 2004. Then he goes on to quote the man who seems to have done most of the original research:

One of the most popular legends about Tubman is that she commanded a black regiment’s raid in South Carolina that destroyed Confederate outposts and freed hundreds of slaves. This would’ve made her the first female to command such an expedition in American history. The problem is that it’s “wishful thinking,” according to Tubman biographer Milton Sernett.

The retired historian says his thorough research led him to question much of what we claim to know about Tubman.

“It gradually dawned on me that much of what we as Americans thought we knew about Harriet Tubman was not derived from good historical research but was a perpetuation of a larger-than-life story. The symbol had overpowered the life, had overshadowed the historical person.”

I think Greer is excellent on what this is all means:

The significance of the Tubman twenty will be felt on a daily basis. When a heritage American picks up a twenty-dollar bill and sees Tubman’s grimace staring back at him, he’s reminded it’s not his country anymore.

And on who is partially to blame:

“A plethora of conservative pundits were outraged by Waldman’s assertion that they were upset by the change to the twenty-dollar bill…Tubman’s elevation over a genuine American hero is yet another example of the war on America’s heritage. We can no longer honor our great figures because they’re too white and held views offensive to modern progressives. We replace them with marginal figures like Tubman to uphold liberal orthodoxy. Only idiots who write for National Review for a living would count it as a victory. “

We noticed this disgusting phenomenon in 2016 in The Tubman Turncoats: Cuckservatism Inc. Has Learned To Love Big Sister and again in 2019: Valerie Jarrett Is Reviving The "Harriet Tubman On The $20" Thing, And Ben Shapiro Is All For It.

There is one thing Scott Greer does not touch on which I think proves that anti-white animus rather than any interest in Tubman is the dynamic here. James Fulford raised the issue in his 2015 discussion of the Tubman historical sources: Harriet Tubman—Gun-Toting Republican, Delusional Narcoleptic, And/Or Creation Of Communist Propaganda?

A final point: how did the modern Harriet Tubmania get started? McPherson explains:

“For decades after her death in 1913 at the probable age of ninety (her exact birth date is unknown), Tubman languished in obscurity. The only African-Americans who enjoyed historical fame in those years were George Washington Carver and Booker T. Washington. In the 1930s the labor activist Earl Conrad (Earl Cohen) decided to write a biography of Tubman.”

Conrad/Cohen was either a Fellow Traveler or a Communist Party member.

So there is a curious parallel to the leading American Black mythical hero. As I noted in MLK's Communist Handler: He Was "Such A Slow Thinker," the intellectual force behind Martin Luther King was provided by one Stanley Levison, also a one-time Communist.