The right of ordinary men and women to determine their own future, protected by the rule of law, lies at the heart of America's founding principles. As our country celebrates the 50th anniversary of Law Day, we renew our commitment to the ideals on which this great Nation was established and to a robust system of ordered liberty.

The American legal system is central to protecting the rights and freedoms our Nation holds dear. The theme of this year's Law Day, "The Rule of Law: Foundation for Communities of Opportunity and Equity," recognizes the fundamental role that the rule of law plays in preserving liberty in our Nation and in all free societies. We pay tribute to the men and women in America's legal community. Through hard work and dedication to the rule of law, members of the judiciary and the legal profession help secure the rights of individuals, bring justice to our communities, and reinforce the proud traditions that make America a beacon of light for the world.

While the Mexichurian President is providing lip service to America's legal framework, his government continues an open-borders policy which shreds the idea of a Nation of Law. A 2007 CIS study found that nearly 6 million illegal immigrants have entered the country during Bush's administration. On the subject of borders, sovereignty and immigration at least, Bush has been the most lawless President in history.

Naturally, May 1 has a different significance to the Marxican extremists who have been rallying today in citiies across the country. Here's one representative photo, snapped by blogger Urban Infidel in New York City. The guy's sign combines a screw-you-America element with a sniffler appeal using a teary-eyed baby, plus there is a Mexican flag nearby — a 3-fer! 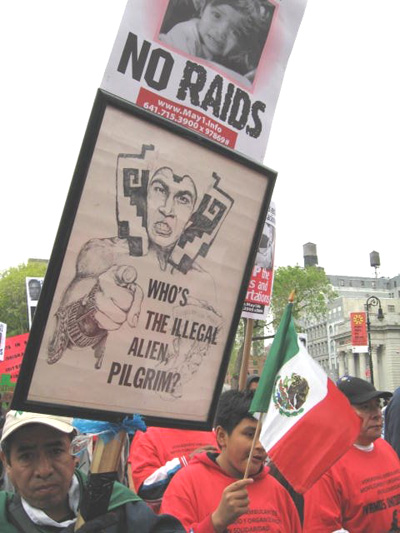