It’s been two years of below-average rainfall in the Golden (Brown) State, so water supply is causing concern. The snowpack is only about half of historic levels, but new water users keep coming from around the world. How will newbies wash their lowriders if water use is restricted?

Below, California Department of Water Resources hydrologists measure the snowpack in the Sierras. 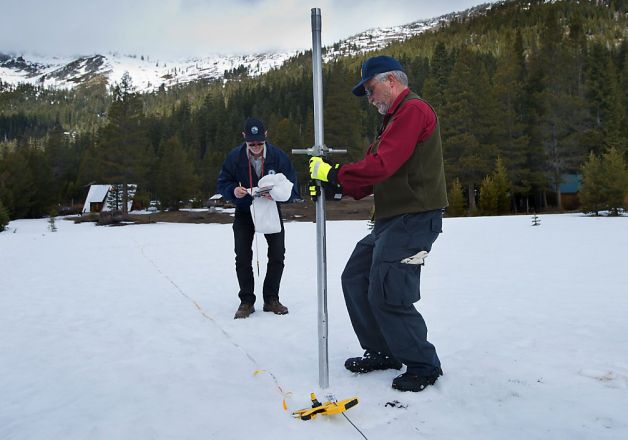 Nevertheless, Washington elites plan to shoehorn in millions more foreigners into our crowded land. The Senate amnesty bill would add a 50 percent increase in legal immigration even though America already has the most generous legal system in the world.

Today — Earth Day — the Judiciary Committee presented its immigration hearing circus with 20 witnesses that did not have a single speaker to explain the pressure of increased population on finite resources.

Modern environmentalists are too politically correct to link population growth with environmental damage, in particular resource use beyond what the earth can normally replenish, aka sustainability. When Senator Gaylord Nelson began Earth Day, he and other environmentalists like David Brower honestly discussed the connection between immigration-fueled overpopulation and the overuse of natural resources, like water.

These days, the public doesn’t hear much about overpopulation reality.

The sprinklings of rain and dustings of snow that will fall on California over the next few days are not going to make up for three of the most remarkably dry months in state history, water resources officials said Thursday.

The mountains of the Sierra, which were buried in giant mounds of snow as the new year began, are now comparatively bare. The monthly measurement of the state’s frozen water supply Thursday found 52 percent of the normal snowpack for April 1.

“This is more gloomy news for our summer water supply,” said Mark Cowin, director of the California Department of Water Resources.

The amount of water in the snowpack at this time of year is extremely important, he said, because the largest proportion of the ice that melts in the Sierra after April 1 is captured in nearby reservoirs. That water used to irrigate millions of acres of farmland and quench the thirst of most of California’s 37.8 million people.

Paltry precipitation has been a statewide issue over the past three months, which is unusual because those 90 days are normally the rainiest time of the year, said Jan Null, a meteorologist for Golden Gate Weather Services and an adjunct professor of meteorology at San Francisco State University.

Driest on record
Null, a former lead forecaster for the National Weather Service, said that as of Thursday, a total of 1.72 inches of rain had fallen in San Francisco in January, February and March, the driest first three months of the year in the city since records began in 1850. That’s compared with a long-term average of 12.39 inches for those three months, which accounts for more than half of San Francisco’s average annual rainfall of 23.65 inches, he said.

“Those three months are critical,” he said.

High ridge lingers
The unusually dry weather was caused by a ridge of high pressure that has lingered over the West Coast, pushing storms north of California and over the eastern half of the country. It is why the Plains and Eastern United States have been pounded by storms and, in some cases, record cold.

Null said San Francisco is usually a good gauge of statewide precipitation trends. The city also has the longest consecutive rainfall record in the state.

The snow water content in the Central Sierra, which includes the Lake Tahoe area, is now 57 percent of normal, based on the average of 40 electronic monitoring stations. That’s compared with 90 percent of normal two months ago and 134 percent of normal on Jan. 2, when the first snow survey of the year was conducted.

The Northern Sierra is at 55 percent of normal, and the Southern Sierra at 40 percent of normal. Only 13 inches of snow – 32 percent of the long-term average – was measured Thursday in the meadow behind Phillips Station, a historic, privately owned cabin near Echo Summit. That’s compared with 4 feet three months ago. An average of 15 inches of water was found in the snow throughout the Sierra, based on measurements from more than 300 sites.

Not all bad
Still, Null said, things aren’t all bad. Despite three months of dry weather, San Francisco has still gotten 71 percent of normal precipitation for the season, which goes from July 1, 2012, to June 30, 2013, thanks to an abnormally wet November and December.

The state’s water supply is also in good shape – at least right now – for the same reason.

Lake Oroville, the primary storage reservoir for the State Water Project, is at 83 percent of its capacity, which is 108 percent of average for this time. The water project provides water to 29 public agencies, which supply more than 25 million Californians and irrigate nearly a million acres of farmland.

Shasta Lake OK
Shasta Lake, which is part of the U.S. Bureau of Reclamation’s Central Valley Project and is the largest reservoir in the state, is at 82 percent of capacity, or 102 percent of normal.

Nevertheless, pumping restrictions between November and February designed to protect migrating fish reduced the supply at the San Luis Reservoir – an important summer supply pool for both the State Water Project and the Central Valley Project, according to Cowin. The reservoir is only 63 percent full, he said.