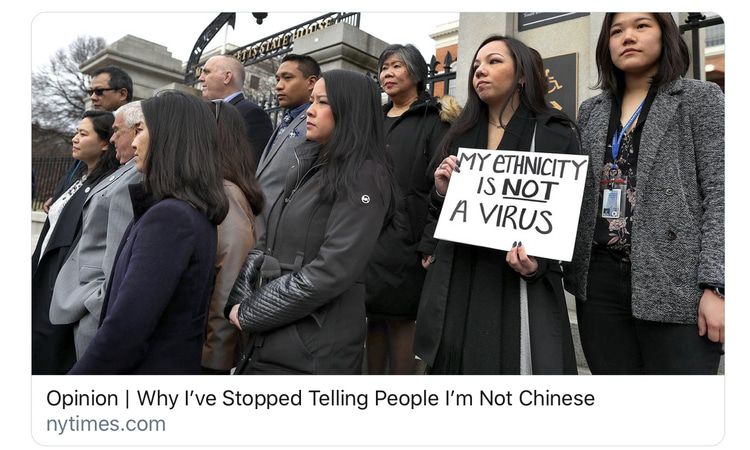 Happy Days Are Here Again: Another Korean Woman Writer Tries to Get Mileage Out of Purported Anti-Chinese Discrimination

Why I’ve Stopped Telling People I’m Not Chinese
When confronted with racism toward anyone, our instinct should be indignation, not deflection.

Euny Hong (@euny) is the author of “The Birth of Korean Cool” and “The Power of Nunchi: The Korean Secret to Happiness and Success.”

Mid-February, when the world was starting to go pear-shaped, I had to travel to an area where I’d previously experienced anti-Asian sentiment. So a few days before the trip, I emailed my (white) hairdresser frantically: “I know this sounds crazy but can you can make me blonde? I’m traveling next week and I’m worried about being mistaken for Chinese and blamed for the coronavirus.”

Let’s skip the ridiculousness of the idea for a second to focus on the important bit: Why had I worded my request so offensively? I could have just said I was worried about xenophobia. Why was I throwing people of Chinese descent under the bus? It’s like that old joke about the two people running away from a bear: You don’t have to outrun the bear, you just have to outrun the other guy. Except in this case: You don’t have to deal with racism; you just have to make people racist at someone else.

My panic was a humbling reminder that I should never be overly confident that I would do the right thing in the face of fear. Sure, wanting to avoid racial profiling is a survival instinct. But survival instincts are often amoral and, if unchecked, can easily turn ugly. …

This impulse isn’t exactly new, even if the pandemic has brought out its most sinister form. I’ve been doing it since I was a child. Worse, I was taught to do it.

When I was a kid in late-1970s suburban Chicago, anti-Chinese taunts were a daily occurrence. It was a frequent topic at Korean church — the only place we clapped eyes on other Koreans outside our own homes. Our parents and Sunday school teachers told us that the correct response was, “I’m not Chinese; I’m Korean.” …

I had a Korean guy working for me who moved to the Chicago suburbs in the 1970s. He wasn’t anti-Chinese, he just loathed the Japanese. He was a friendly guy on all topics except the vileness of the Japanese.

Last month, a Chinese-American friend of mine posted on social media about a targeted internet ad that had outraged her. In the wake of Covid-19, some clothing vendor saw a business opportunity: a series of T-shirts with slogans like, “I’m Asian but I’m not Chinese,” “I’m not Chinese, I’m Korean,” “I’m not Chinese, I’m Malaysian,” etc. Her friends’ comments under her post were equally indignant. (So much for predictive algorithms, by the way.)

My first thought was, “I wish we’d had these shirts when I was a kid.”

And then I stopped myself, horrified.

By way of context — not justification — Asians have been siccing people on other Asians for ages. In World War II-era America, some Asian-owned businesses posted signs in their windows specifying that they were not Japanese. I have even met a few Asians of that generation who currently believe that it made political sense for Franklin D. Roosevelt to put Japanese-Americans in internment camps. Just the Japanese.

Uh, you know, Chinese, Koreans, and Filipinos in the U.S. had reasons for hating the Japanese during WWII that were not just sucking up to white racism.

Which is not to say that mislabeling isn’t dangerous; it can even be deadly. In Highland Park, Mich., in 1982, there was an incident that all Asian-Americans of a certain age remember vividly: A Chinese-American named Vincent Chin was murdered in a strip club by two white autoworkers who assumed he was Japanese — one of the people who, they believed, had destroyed the American auto industry.

It was a tragic case of mistaken identity. But to respond to that horrific incident with “Vincent Chin wasn’t even Japanese!” is to create a dangerous distraction from the core issue: It is never OK to attack anyone based on their race.

You mean murder is never OK? Who knew?

For as long as I can remember, I’ve bristled at the Asian-American label. I found it frustratingly meaningless, lumping together diverse groups under one heading in a way that promoted precisely the kind of generalizations we want to prevent. “You all look the same,” or, “I bet you love Excel and bad driving.”

But what I’ve come to realize over the past few weeks is that even if I don’t identify with that designation and find it overly broad, like it or not, it shapes how people see me. The only path forward for any of us requires a united front.

Against whites. Asians need their unifying KKKrazy Glue too.

If someone says, “You Chinese are killing us,” I am in that moment Chinese.