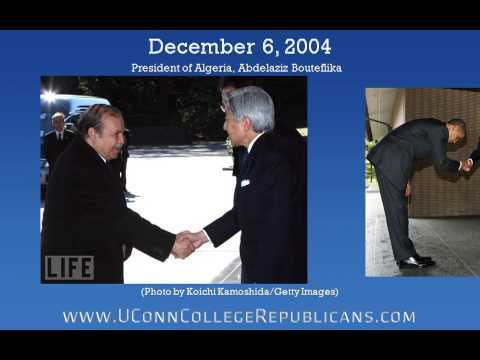 Handshakes, Bows, And The Pacific President

From the Powerline Blog:

"President Obama declared in Tokyo that he is "America's first Pacific president." He thus displayed, simultaneously, his Obama-centric view of the world and his ignorance of American history and geography.

Asian countries have become understandably nervous about the Obama admnistration's policy of "strategic reassurance," whereby the U.S. tries to convince the Chinese that it has no intention of containing their rising power, a pledge Obama reiterated in his Tokyo speech. Does Obama really believe nations like India and Japan, that must deal with the consequences of China's rising power, will take any comfort from the fact that Obama lived in Indonesia and Hawaii when he was young? Sadly, Obama may be sufficiently egomaniacal to believe just that.

Obama's self-description is not only irrelevant, it is inaccurate. Several presidents lived for years in California. Other presidents have spent meaningful time living in "Pacific" areas outside the continental U.S. As John Pitney reminds us, William Howard Taft was governor-general of the Philippines; Dwight Eisenhower had military postings in the Philippines and the Panama Canal Zone; and Herbert Hoover worked as a mining engineer in Australia and China where he learned to speak Mandarin. In addition, Kennedy Johnson, Nixon, Ford, and Bush 41 all served in the Pacific during the Second World War. These experiences seem more germane to understanding the "Pacific rim" than being a child in Indonesia for a few years and a teenager in Hawaii."

In fact, the distinction Obama could claim is that he's from Hawaii, (yes, really) and thus from the American state that was a victim of Japanese aggression. But he's not going to say that.

Here are pictures of dozens of leaders meeting Emperor Akihito. None of them seem to see the need to bow—except Obama.