Ground Zero of the Mortgage Meltdown 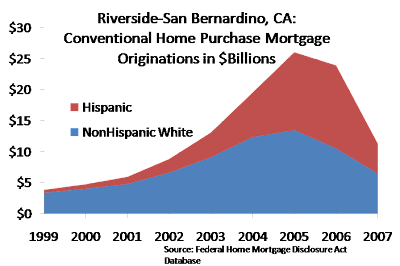 Last October, my reader "Tino" introduced me to the federal government's Home Mortgage Disclosure Act database, which was set up to ensure that minorities are getting enough mortgages. It doesn't measure whether they're paying the mortgages back, and it's rather awkward to work with, but it's very useful for understanding how we got the Housing Bubble, which set off the Mortgage Meltdown, which set off the Global Gnashing of Teeth.

The above graph focuses on what might be Ground Zero of the foreclosure crisis, Southern California's Inland Empire, the Riverside-San Bernardino-Ontario Metropolitan Statistical Area. It shows billions of dollars of new mortgages originated for Conventional Purchases of of housing (Table 4-2) from 1999-2006. It doesn't include many other types of loans such as FHA, nor does it include refinancing. Further, to simplify things, I've left off Asian, blacks, and other minorities, mixed couples, and mortgages where race is unknown.

As overly-simplifed as it is, it still gives an informative overall picture of what went on in the Inland Empire that first drove prices through the roof and then back down again: a giant surge of lending to Hispanics, followed by a sobering up that no doubt accelerated in 2008.

The most obvious fact is that new mortgage dollars flowing to Hispanics in this sprawling California region increased an astonishing 2,704% from $0.5 billion in 1999 to $13.4 billion in 2006. Is there a word in the English language for that? We have words like doubling, tripling, quadrupling, but I've never heard of a 28-tupling.

To put the 1999 to 2006 change in perspective, conventional purchases mortgage dollars handed out in the Inland Empire in 2006 to Pacific Islanders (Samoans and the like) were virtually as the same as 1999 lending to the huge Hispanic community ($0.489 billion for Pacific Islanders in 2006 versus $0.496 billion for Hispanics in 1999).

In 2007, Hispanic borrowing crashed back down to $4.8 billion in 2007 as financial institutions finally started to worry about loan quality. In the Inland Empire in 1999, Hispanics received only 15% as much conventional purchase mortgage money as non-Hispanic whites did. By 2006, they received 128% as much.

Clearly, there was a mortgage bubble among non-Hispanic whites, too, but borrowing peaked earlier in 2004-2005 and has declined in a more orderly fashion. In contrast, the Latino bubble peaked in 2005-2006 and then started to collapse in 2007. (In 2007, Hispanic borrowing was back down to 75% of white borrowing.)

If you look at all minorities, the non-Hispanic white share of conventional purchase mortgage dollars in the Inland Empire fell from 73% in 1999 to 35% in 2006.

Keep in mind that the Bush Administration was actively promoting riskier lending to minorities, such as by calling for the elimination of down payment requirements.