Most Americans have not yet laid in their supply of Halloween candy, but in Seattle, the authorities have already excised Christmas from public experience in the Sea-Tac Airport.[See previous Sea-Tac coverage here and here—contact Sea-Tac here.]

Instead of traditional decorations, leafless faux birch trees will be lit in magenta tones. So tasteful, multicultural and lawsuit-free. Diversity at work! 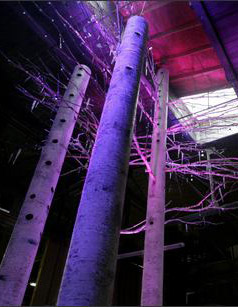 Above the trees will be a spiraling flock of migrating birds cut out of foam. Every once in a while, non-toxic snow will fall over the forest to the sound of wind chimes, joining the hubbub of Sea-Tac's busy holiday travel season from the forest's location at the south end of the main terminal, in the international arrivals hall.

Once the eye has adjusted to the changing lights, the snowfall and the strangeness of seeing a winter scene re-created indoors, the most noticeable aspect of the new holiday decorations will be their lack of religious symbols. [Airport Will Celebrate Winter, but Not Christmas Seattle PI 10/19/07]

The change from traditional to multicultural results from a disagreement last year where a local rabbi asked that a menorah be added to Christmas decorations. That request seems reasonable enough, since many communities accommodate both, but the Seattle bureaucrats decided to bail on American religious values entirely.

Reportedly they feared demands for every holiday under the sun, presumably from Kwanzaa (the holiday created by Marxist Ron Karenga) to Diwali, Ramadan and Ashura.

Diversity — it's a slippery slope!