An upcoming book by economic historian Gregory Clark, author of A Farewell to Alms:

The Son Also Rises: Surnames and the History of Social Mobility (The Princeton Economic History of the Western World) [Kindle Edition] 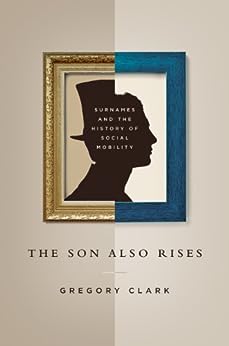 How much of our fate is tied to the status of our parents and grandparents? How much does this influence our children? More than we wish to believe. While it has been argued that rigid class structures have eroded in favor of greater social equality, The Son Also Rises proves that movement on the social ladder has changed little over eight centuries. Using a novel technique—tracking family names over generations to measure social mobility across countries and periods—renowned economic historian Gregory Clark reveals that mobility rates are lower than conventionally estimated, do not vary across societies, and are resistant to social policies. The good news is that these patterns are driven by strong inheritance of abilities and lineage does not beget unwarranted advantage.

The bad news is that much of our fate is predictable from lineage. Clark argues that since a greater part of our place in the world is predetermined, we must avoid creating winner-take-all societies.

Clark examines and compares surnames in such diverse cases as modern Sweden, fourteenth-century England, and Qing Dynasty China. He demonstrates how fate is determined by ancestry and that almost all societies—as different as the modern United States, Communist China, and modern Japan—have similarly low social mobility rates. These figures are impervious to institutions, and it takes hundreds of years for descendants to shake off the advantages and disadvantages of their ancestors. For these reasons, Clark contends that societies should act to limit the disparities in rewards between those of high and low social rank.

Challenging popular assumptions about mobility and revealing the deeply entrenched force of inherited advantage, The Son Also Rises is sure to prompt intense debate for years to come.

One of the things that weirded English people out about Margaret Thatcher being Prime Minister was that even after 700 years or so, "Thatcher" was still a pretty downscale name. In contrast, here is a list of Anglo-Norman names from 1066 and all that: Fitzgerald, Mandeville, Percy, Baskerville, Beaumont, Curzon, Grosvenor, Longchamp, Warren, etc.A lot of heiresses and their mothers have plotted intensely over the centuries in England to marry guys with classy sounding names. For example, according to the speculation of biographer William Manchester, the genetic reinvigoration of the Churchill line after the the half dozen generations following the spectacular John Churchill, first duke of Marlborough, was due to Winston's paternal grandmother and mother, daughter of a self-made New York millionaire. Blenheim Palace and grounds (by Capability Brown) is a romantic spot for wooing heiresses.

Future Gregory Clark titles to follow A Farewell to Alms and The Son Also Rises will hopefully include: