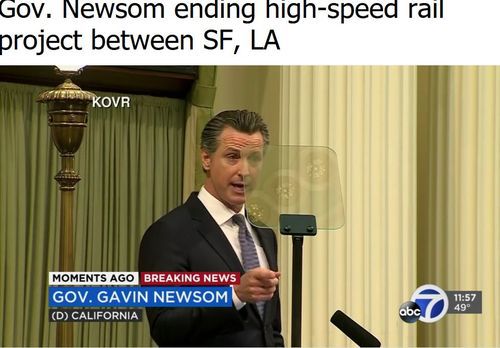 I’ve given a lot of skeptical coverage over the last 11 years to the plan to build high speed rail to link Los Angeles and San Francisco. It’s hardly technically impossible: Spain has high-speed rail. But it’s just not the kind of thing likely to get built in modern California.

Jerry Brown’s championing of the HSR project for the last 8 years seemed based less on a reasonable assessment of the situation and more on a personal psychodrama of Jerry trying to finally match his father, Governor Pat Brown, the Great Builder.

Today, from the Associated Press:

SACRAMENTO, Calif. — California Gov. Gavin Newsom announced Tuesday he’s abandoning a plan to build a high-speed rail line between Los Angeles and San Francisco, a project with an estimated cost that has ballooned to $77 billion.

“Let’s be real,” Newsom said in his first State of the State address. “The current project, as planned, would cost too much and respectfully take too long. There’s been too little oversight and not enough transparency.”

The idea long championed by Newsom’s predecessor, Jerry Brown, is years behind schedule. The latest estimate for completion is 2033.

Newsom, though, said he wants to finish construction that’s already underway on a segment of the high-speed train through California’s Central Valley, arguing it will revitalize the economically depressed region.

As I said recently:

It’s almost as if affluent, influential people in California like the way California used to be before all the Diversity arrived, so they promote environmentalist roadblocks to keep their part of California from ever adjusting to the state’s vast new population “Environmentalism” is so much nicer of a word than “segregation.”

iSteve commenter George calls my attention to a classic example of California heel-dragging against building things from Curbed: San Francisco:

“We do not know for certain how long that will take,” says Supervisor Hillary Ronen
By Adam Brinklow Feb 14, 2018

Think of all the sentimental memories San Franciscans must have of watching their clothes go round at this historic laundromat!