In 2007, I blogged about a community where improvement-minded leaders complained that their town was not sufficiently diverse: Social Engineering in Green Bay and Beyond. At that time, a mere 20 percent of residents were non-white – how embarrassing.

But now, annoying national tradition is falling away to be replaced by a more properly globalist identity by welcoming the world. And Green Bay has gone for the hard-core diversity stuff by taking in lots of Somalis, the well known polygamists, FGM practitioners and enthusiastic jihadists. They certainly add a foreign flavor to a town. 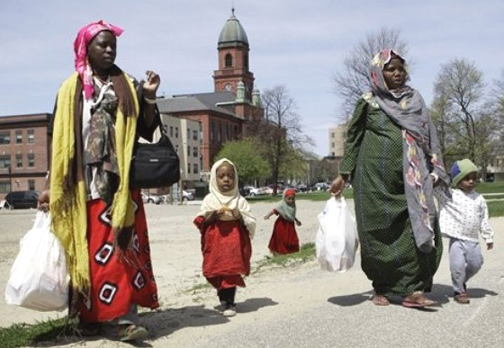 The number of Somali students enrolled in the Green Bay School District has more than quadrupled since the end of last school year.

The district now enrolls 90 Somalis, compared with 49 in September and just 18 in June. The district’s overall student population tops 21,000.

The growing number of Somali students – many of whom need help to improve their English skills – prompted the Green Bay district to hire someone full time to support and instruct students, to work as a parent contact for schools and to interpret. Abdul Nur’s first day is Monday. [. . .]

”We have had an influx of Somalis in the past year and a half or so,” said Mohamed Ibrahim, a mosque leader. ”They come to worship and be part of a community.”

Catholic Charities this year assisted two Somali families who had refugee status to move to the U.S. to reunite with family members, according to the Catholic Diocese of Green Bay.

The main reason the Green Bay area has seen an increase in the Somali population is reunification of extended families, said Judy Roemer, family strengthening manager for Catholic Charities. [, . .]

The article makes no mention of whether the residents of Green Bay are pleased with their community’s rapid transformation to post-American.