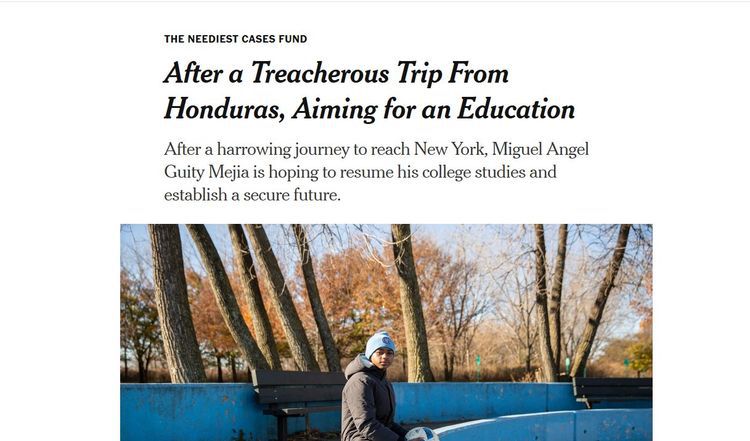 We are now officially in the Holiday Season, and many elite news outlets feel compelled to do good works now to demonstrate their civic involvement. The New York Times has set up a Go Fund Me website to collect funds for various victims of circumstance who have life stories the scribblers find appealing. The New York Times Neediest Cases Fund aims to raise $6 million, so it’s not a small project.

One of the newspaper’s lucky recipients is an illegal alien from Honduras, Miguel Angel Guity Mejia, whose goal is to mooch a college education — and readers are urged to donate to that cause.

Mejia’s goal for his future degree is to become a sports journalist and work for Univision or Telemundo — just what America needs, another soccer reporter. Does a more socially useless occupation exist?

Meanwhile, some Americans are not doing well even in the improved economy, and less globalist charities concentrate on their needs.

Naturally, the Times’ explanatory article is even more breathless and emotional than standard sob stories from the liberal press.

After a Treacherous Trip From Honduras, Aiming for an Education, New York Times, November 25, 2019

After a harrowing journey to reach New York, Miguel Angel Guity Mejia is hoping to resume his college studies and establish a secure future. 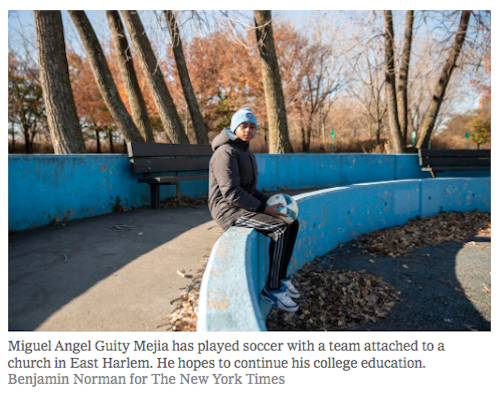 When Miguel Angel Guity Mejia was 16, he packed his Bible, a pair of shoes and some clothes in a knapsack. In the dead of night, he left home without saying goodbye to his family. They had no idea he was fleeing Corozal, the coastal village in Honduras where he grew up.

He stayed in a hotel with three friends for about a week, until the border with Guatemala was clear of immigration authorities. Then they set out for the United States, eager to escape the reach of gang members who were hanging around soccer fields and basketball courts, trying to recruit youngsters like him.

“I was getting scared,” he recalled this month, four years after his journey began.

For more than two weeks, he and his friends walked, hitchhiked, took buses and hid between train cars. When they arrived at the border between the United States and Mexico, they had to swim across a river. “That was the moment that changed my life forever,” Mr. Mejia said.

Once they reached the middle of the river, the current was so strong and the water so deep that one of Mr. Mejia’s friends started drowning. Mr. Mejia tried pulling him up by his shirt, but to no avail. He also started drowning. “God, please,” he recalled thinking. “Please save me.” Suddenly, they reached a riffle and managed to cross to the other side.

The ordeal lasted minutes, Mr. Mejia said, but it felt like a lifetime.

They eventually approached Border Patrol agents, and Mr. Mejia was placed in a shelter run by the Office of Refugee Resettlement in Texas for about four months until he moved to New York to stay with his father and stepmother.

Before then, Mr. Mejia had almost no relationship with his father, who had left the family for the United States when Mr. Mejia was an infant and eventually settled in the Bronx. About seven years ago, Mr. Mejia’s father called him unexpectedly, and Mr. Mejia memorized the phone number. When he arrived in Mexico, he reached out to his father for help.

In the Bronx, Mr. Mejia, now 20, enrolled in high school and joined the school’s soccer team (he is a die-hard Real Madrid fan) in his junior year. While he was grateful to have left Honduras, which has one of the world’s highest murder rates and where more than half the population lives in poverty, according to the Central Intelligence Agency, the adjustment was challenging. His father went from being a stranger to his caregiver, and Mr. Mejia was homesick.

In the summer of 2016, he was so down that he considered returning to Honduras. Then he joined another soccer team, at a church in East Harlem, and started attending services there. It was a transformative experience, he said, and it gave him a sense of inner peace. The resentment he had felt toward his father for leaving him when he was a baby eased, and he began to appreciate how hard his father had worked to provide for his family.

As he became more comfortable in the United States, Mr. Mejia applied for an immigration designation that would make him eligible to seek a green card. He had help from Terra Firma, a project of Catholic Charities of the Archdiocese of New York, one of the seven organizations supported by The New York Times Neediest Cases Fund. Terra Firma offers medical and legal services to unaccompanied immigrant children. Mr. Mejia’s application is still pending.

Mr. Mejia has since graduated from high school. Because of his immigration status, he is not eligible for many financial aid opportunities to attend college. After receiving a $1,000 scholarship through his high school, he enrolled at Bronx Community College in August with plans to major in media studies. The $600 that he had saved from a summer job at a carpet factory in Brooklyn ran out quickly, though, and last month, Mr. Mejia dropped out. (Continues)

Post
This Day in VDARE.com History, 2015: AMERICAN THINKER On Murder By Illegals; A MUCH Higher Rate Than US Citizens