Michael Tracey noticed this posting by Ned Resnikoff, a senior editor at the liberal mainstream ThinkProgress site run by the Center for American Progress, which was founded by Hillary’s campaign manager John Podesta: 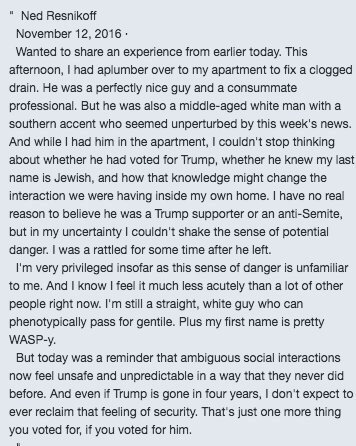 And from The Tablet:

Historically, Jewish country clubs were founded precisely because other clubs kept Jews out

When I was growing up, there were two country clubs in town (that anyone who was anyone belonged to, at least). The Jewish one, where people had wedding receptions and bar mitzvah parties that my parents and I would attend sometimes, and the other one, which was shrouded in mystery. I once asked my mother why this was, and she explained that the one I thought of as the main one was the Jewish one, founded years ago in response to the policies of the other, which had prohibited Jews from membership. Long after the restriction was dropped, the tradition persisted. “But we don’t belong to either of them,” I remember saying. “Daddy doesn’t play golf,” she replied. “And if you want to swim, you can go to the J.”

This story came to mind as I read the recent New York Post report that the Woodmont Country Club—founded in the DC area for the same reason, if you get my drift—has members at each other’s throats over whether or not they should accept President Obama as a member when he returns to private citizenship later this month (God help us all). The reason? Many people aren’t happy with his perceived stance on Israel—by which I mean, how they have chosen to perceive Obama’s supposedly allowing a U.N. resolution condemning the continuance of illegal settlement construction in the West Bank. Because that, apparently, has a lot to do with your golf handicap, I guess.

If you read this column with any regularity, you know where I stand politically on this sort of thing, so let’s save all the Internet fury and recrimination for our own Facebook pages for now, shall we? Obviously, Woodmont has the right to let in or not let in whoever they want, and I am confident the President—a President who held the first seder ever in the White House, who has had more Jews in key positions than any other administration in history, and whose policy views are echoed by the vast majority of American Jews—will ultimately find a nice place to play golf. But it is something that a club founded in protest of exclusion of those with different worldviews, so to speak, should feel so comfortable with it in practice.

And as for those of us dissenters who support President Obama? … I guess we’ll just have to start our own club. As soon as we learn how to play golf.

But that history has been retconned. Great-Grandpa Sy’s story about how he wanted to join the German Jewish club in 1922 but got blackballed by old money Jews as a crass oriental on the make is now remembered as how Sy wanted to join the WASP/Irish club, with its terrible kitchen, unfunny entertainment, alcoholism, lack of luxury, and uselessly exquisite golf course, but was victimized by gentiles’ anti-Semitism.

For example, the reason the movie moguls who founded Hillcrest Country Club in Los Angeles blackballed Joseph P. Kennedy’s membership application when he was funding his girlfriend Gloria Swanson’s attempts to produce her own movies was … well, just watch Billy Wilder’s horror comedy Sunset Boulevard for the movie industry’s opinion of pushy gentile broads like Swanson and Mary Pickford who try to control their own fates.

In other words, anti-Semitism was the reason.