Episode 75 of my podcast is now posted here (with copious links) and on YouTube. Something a little different for you: an interview of someone whose worldview is very different from my own. Tara Prema (not her real name or voice) is a self-described radical feminist and a TERF. She describes how the student-supported Women’s Centre at the University of Victoria was captured by a tiny minority which rejects the traditional concerns of feminism as European and insufficiently inclusive and is committed instead to “those who live wholly or partially on the margins.” 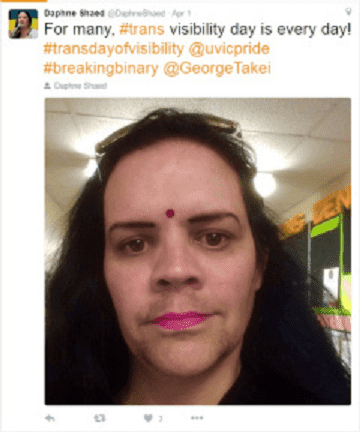 Specifically, this means women that were not born female, even women with a penis. The ringleader of this takeover is an entity called Daphne Shaed, self-described as a “tranny cyborg Hindu” and “heterosexual lesbian.” Here we see intersectionalism in all its malevolent glory. Curiously, the bizarre affair was ignored by the MSM and traditional feminists, who have been cowed into silence by the big guns of World War T.

The Feminist New Wave is so “sex-positive” as to embrace not only pornography but also prostitution. Ms. Prema told me this deformation is the result of consensual liberalism allied with venality. Transgenderism means big money for Big Pharma and the medical-industrial complex in general. The movement is bankrolled by Jennifer (née James) Pritzker, the world’s first transsexual billionaire and funder of the world’s first chair of transgender studies (at, coincidentally, the University of Victoria). 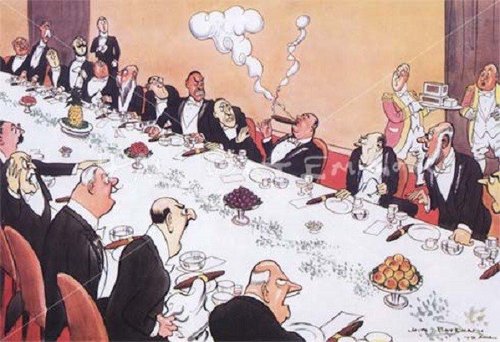 Episode 74 (posted here with links and here on YouTube) gives two cheers to Congressman Steve King of Iowa for his already legendary pronouncement, “We can’t restore our civilization with somebody else’s babies.” The reaction that followed, which much resembled a cartoon by H.M. Bateman, was so extravagant that one might have thought King had confessed to eating somebody else’s babies.

Wilders understands that culture and demographics are our destiny. We can't restore our civilization with somebody else's babies. https://t.co/4nxLipafWO

The MSM conveniently ignored the context of King’s tweet, which was the riot in Rotterdam by Turks incited by the Dutch government’s refusal to allow Turkish cabinet ministers to campaign in The Netherlands in support of increased powers for President Erdoğan. The rioters may be Dutch citizens, but they are “Dutch” only by the narrowest legal definition. Geert Wilders knows this, and so does Rep. King.

I withheld a third cheer because of King’s disavowal to Chris Cuomo of CNN that his tweet had anything to do with race. "It's the culture, not the blood,” he declared, before expressing the utopian hope that “If you go down the road a few generations, or maybe centuries, with the inter-marriage, I'd like to see an America that is just so homogenous that we look a lot the same.” As I noted, the Kardashians are certainly doing their best to make this a reality, but few others are interested, despite the manufactured consent of our elite.

Still, King’s tweet shifted the Overton Window significantly. Demography is destiny. Our elite certainly believes this but won’t tell us the truth—that its goal is the election of new peoples everywhere in the West, the better to reduce us to atomized consumer slaves.

Episode 73 (posted here with links and here on YouTube) is my interview the pseudoanonymous P.T. Carlo, co-founder of that delightful new webzine Thermidor. Carlo insists on the necessity of ideology, a position with which I would have disagreed not that long ago. And yet after years of irritation (and worse) at Movement Conservatism’s relentless and increasingly risible appeals to the shades of Edmund Burke, Alexis de Tocqueville and Russell Kirk, I have had cause to change my mind.

I remain agnostic with regard to Carlo’s fondness for the so-called NRx (new reaction). America is unquestionably a liberal foundation, and thus appeals to older forms of political economy are quite rightly denounced as anti-American. Not for the first time, I express the opinion that Donald Trump is American liberalism’s last hope. Should he be taken down by the Deep State or La Résistance or by the latter working on behalf of the former, all bets are off.

Episode 72 (posted here with links and here on YouTube) is a consideration of James Burnham’s magnificent monograph, The Machiavellians, [PDF] the text which has far more than any other informed my political thought. Tl;dr: as Kevin Trudeau would say, this is the truth about politics that they don’t want you to know. Burnham begins with a rehabilitation of Niccolò Machiavelli, who remains a reviled figure because of his alleged cynicism or even diabolism. What his enemies called cynicism, Burnham calls empiricism. To wit, politics are not the pursuit of the good by public servants; politics are the pursuit of power, full stop.

Burnham posits the existence of a Machiavellian school of realism comprised of Gaetano Mosca, Georges Sorel, Robert Michels and Vilfredo Pareto. What these Europeans shared was a deep distrust of mass democracy, seeing it as rule by a self-selected and increasingly corrupt oligarchy shielded from the consequences of their actions by the state’s monopoly on violence.

The Machiavellians explains so much about our current predicament. For instance, George Wallace said famously, “There's not a dime's worth of difference between the Republicans and Democrats.” This is self-evidently true, but how did it come to pass? The reason is that since Hitler put a bullet in his brain in 1945, politics, as traditionally understood, have not existed in the West. More to the point, they have not been allowed to exist, as our ruling oligarchs have not allowed the creation of an alternative elite. And this in turn explains why those complaining that President Trump appointed elite figures to his cabinet are wasting their breath. Trump had no choice.

My only complaint with The Machiavellians is that I did not read it as a young man. It would have saved me years of false hope and wasted effort.

Episode 71 (posted here with links and here on YouTube) is called We All Hate The Media. Therein I discuss how journalists became too big for their boots and aspired foolishly to elite status. Journalists were once content to entertain themselves in their own demimonde. They did not seek to sup with the great, and only colossal bores such as Walter Lippmann believed their effusions to have more than quotidian value.

The journalists of old were usually clever and curious men. Today’s journos are generally dimwitted, ignorant and reflexive. They are also increasingly female, which explains both their hivethink and their near-hysterical amour-propre. “Democracy dies in darkness,” proclaims the Washington Post—funny, funny stuff coming from a rag that these days is hardly to be distinguished from BuzzFeed.

Journalism as we have known it for more than a century is dying. Early signs are that we will return to the days of the pamphleteers. On the one hand that would mean more “fake news” to be sure, but on the other it would mean more honesty, less pretension and an end to bogus “objectivity.”

Finally, it has been brought to my attention that I have on my podcast consistently mispronounced the word “meme.” For some reason, I had thought it rhymes with “hem,” but an investigation revealed it rhymes instead with “cream.” So says Richard Dawkins, and he should know, as he coined the expression.

@rupazero The pronunciation of meme was specified when the word was defined, in The Selfish Gene. Rhymes with cream.