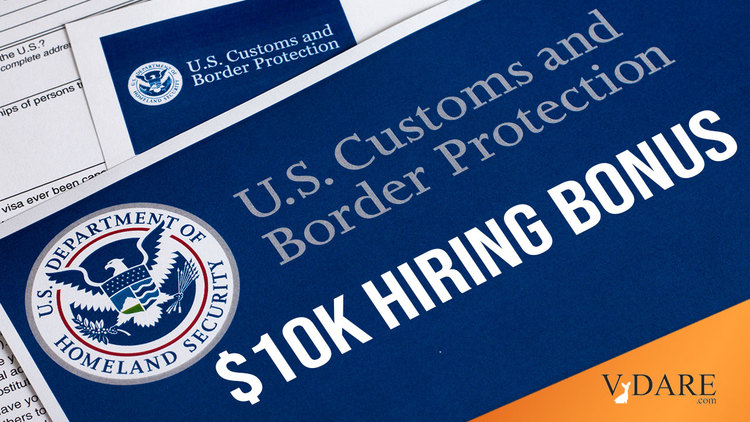 The major enforcement components of U.S. Customs and Border Protection (CBP), the U.S. Border Patrol (USBP), the Office of Field Operations (OFO), and Air and Marine Operations (AMO) are hiring immigration patriots! Even better news is that immigration patriots can take these jobs and receive up to a $10,000.00 bonus depending on the location of their first assignment.

Federal government employment is an excellent career with generous retirement terms: new hires will be able to retire at age 50 and then start a second career or just enjoy retirement, it is up to you. As a retired Department of Homeland Security (DHS) employee, I can highly recommend Federal service, especially the pay and retirement benefits. Deporting illegal aliens is a bonus, as well as great fun. You get to do your patriotic duty and get generously compensated for it. You also get access to insider information, get lots of shooting in, both in practice at the range, and even in the field with drug and alien smugglers.

Border Patrol is offering up to $10,000 as a hiring bonus to tempt prospective agents into stepping up to serve at the southern border — at a time when the agency is being dogged by low morale and a severe migrant crisis.

According to a notice put out on Monday, new agents will be given a $5,000 “recruitment incentive” after finishing the academy. Agents who are assigned to areas in Texas and Arizona deemed “hard-to-fill” locations will get an extra $5,000 on top of that. The development was first reported by The Washington Examiner.

The bad news is that if you’re hired, you probably won’t be making many arrests, at least until 2024. CBP is redesignating itself, and by extension its components, USBP, OFO, and AMO, as a “Humanitarian Agency,” not a law enforcement agency.

Now ICE SVU has no problem being a Humanitarian Agency; it has already left law enforcement for the easier work of facilitating alien smuggling and distributing green cards to prostitutes, but this is a major change for USBP, OFO, and AMO.

As usual, the Biden Regime, looking to its likely removal, either by elections or impeachment, is looking to transform DHS and its law enforcement components from arresting illegal aliens to servicing illegal aliens, presenting this as a fait accompli to the next administration. This will require action by the incoming House Republican majority and the second Trump Administration. Trump needs to make better personnel choices the next time around.

But immigration patriots should take up this opportunity. You can even blog about your experiences and provide insider information to the public. Your humble correspondent did. Serve your nation and get $10K to do so. Your nation calls! Be discreet though!