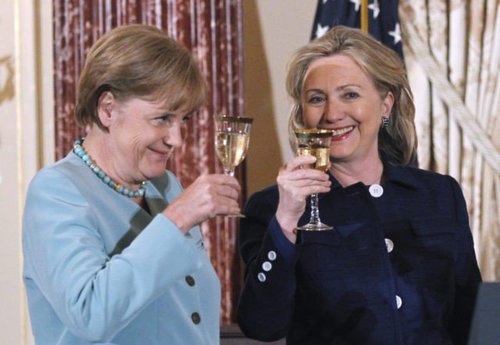 Mrs Clinton's tailor's other high-profile customer, German Chancellor Angela Merkel, has been humiliated in elections to the state parliament of Mecklenburg-Vorpommern in northeast Germany.  Her party was pushed into third place by the upstart Alternative für Deutschland (AfD).

The gentry-left SPD got the biggest share of the vote, 31 percent, down from 36 percent at the last election five years ago.  Second with 21 percent was the Trumpish-populist and Euroskeptic AfD, which did not exist to contest the last election, having been founded only in 2013.

Merkel's gentry-right CDU got 19 percent, their worst result ever in the state, which they have been governing in coalition with the SPD.

Merkel's own Bundestag (i.e. federal parliament) constituency, which boasts the instantly-memorable name Vorpommern-Rügen/Vorpommern-Greifswald I, is one of 17 in the state.

This result in the state election does not directly affect either Merkel's Chancellorship or her Bundestag seat ... unfortunately