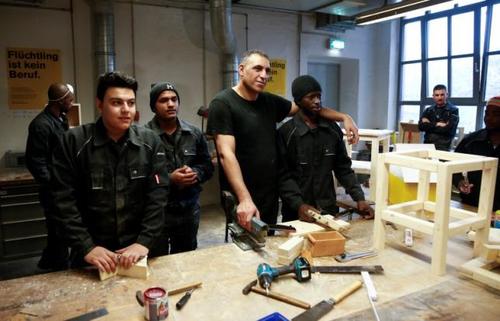 Open borders don’t come cheap: the care and feeding of the new mostly Muslim residents will ding the German taxpayers around $18.6 billion in 2016 according to estimates.

Meanwhile, the state of Saxony (the capital of which is Dresden where PEGIDA protests started) reports that “migrant” crime has risen by 47 percent in one year.

Below, Germany’s Chancellor Angela Merkel poses for a selfie with a diverse new resident. A few years ago she declared that multiculturalism had proved to be a failure, but nevertheless threw open the doors of her nation in 2015 and one million foreigners entered Europe this year largely based on her invitation.

As usual, the local governments have to deal with the thoughtless edicts from on high and pass the costs on to taxpayers.

Germany’s federal states are planning to spend around 17 billion euros (12.6 billion pounds) on dealing with the refugee crisis in 2016, the newspaper Die Welt said on Tuesday, citing a survey it conducted among their finance ministries.

The sum, bigger than the 15.3 billion euros that the central government planned to allocate to its education and research ministry in 2015, is a measure of the strain that the influx is causing across the country as a whole.

The Association of German Cities called for a large-scale home building programme for refugees many of whom have been sleeping in school gymnasiums, office blocks and tents.

Germany is the favoured destination for many of the hundreds of thousands of refugees fleeing conflict and poverty in the Middle East and Africa, partly due to the generous benefits that it offers.

The German states have repeatedly complained that they are struggling to cope, and Chancellor Angela Merkel’s open-door policy has caused tensions within her conservative camp.

Die Welt said that excluding the small city state of Bremen, which did not provide any details, current plans suggested the states’ combined expenditure would be 16.5 billion euros.

The paper said actual costs would probably be even higher because the regional finance ministries had based their budgets on an estimate from the federal government that 800,000 refugees would come to Germany in 2015. In fact, 965,000 asylum seekers had already arrived by the end of November.

HUGE HOUSING NEED Association of German Cities president Eva Lohse said the need for housing for those who will stay here was “huge”.

Demand for entry-level homes for the refugees is expected to boost Germany’s construction industry, which is already benefiting from the low borrowing costs and rising wages that are encouraging Germans to buy.

A group of 29 organisations from the construction and real estate sector said around 400,000 new homes needed to be built annually for several years to reduce pressure on the housing market.

They said that on top of new home construction already underway, up to 80,000 new social homes for rent needed to be built yearly as well as an additional 60,000 affordable homes in areas with overstretched housing markets.

The organisations called for the central government and the states to urgently introduce extra tax incentives to encourage the construction of affordable homes. They said linear tax depreciation on such homebuilding should be increased to 4 percent from 2 percent to create incentives for investors.

The states and municipalities are responsible for most of the costs for accommodating refugees and giving them medical care. The federal government has agreed to pay the federal states 670 euros per refugee per month from 2016 but states complain they are still having to bear the lion’s share of the costs.