Billy and Kathy Inman of Georgia feel the effects of illegal alien crime every day of their lives. Not only was their beloved 16-year-old son Dustin killed 12 years ago when their vehicle was rear-ended by a Mexican, but Kathy was also permanently disabled at that time. Open borders and law enforcement passivity regarding lawbreaking foreigners have harmed them very deeply.

In an effort for revive interest among the public about the very negative effects of illegal alien crime, the Inmans put up a billboard in Cherokee County, shown below. They also hope to bring attention to the criminal, illegal Gonzalo Gonzalez, who is still at large. The Inmans have a website about the preventable pain inflicted on law-abiding citizens called, LegalAmericanFolks.com. 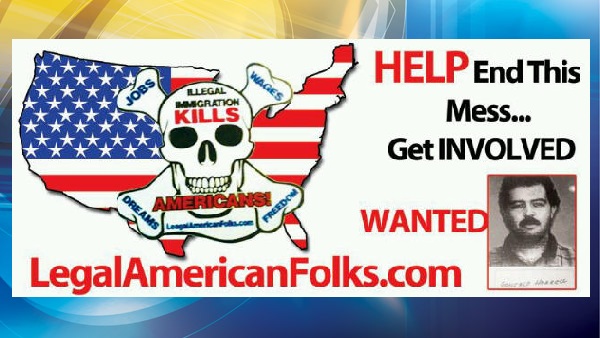 Billy Inman had the billboard posted on Bells Ferry Road near Kellogg Creek in hopes of reigniting the debate over illegal immigration reform.

“Republican, Democrat, Libertarian — everybody, law enforcements, all across the board needs to step up and do this thing instead of kicking it around like a football. There’s too many lives at stake here and it’s just not right,” said Inman.

The billboard shows a picture of the alleged drunk driver involved in the crash that killed Inman’s 16-year-old son, Dustin on Father’s Day 12 years ago. Authorities said that the man was in the country illegally. He is still wanted by police.

“It’s hard knowing that he’s still out here and can do it to you or anybody else. I don’t blame anybody for wanting to be here, but they need to be here legally,” said Billy Inman.

Dustin’s mother Kathy was permanently disabled in the crash and hopes everyone, including state lawmakers, will think about the message behind the billboard.

“I sit and cry all the time about it. I really do. It hurts so bad and now I can’t hug him and kiss him anymore,” said Kathy Inman.

The Inmans took their concerns to the Georgia State Capitol on Thursday for a ceremony honoring other Georgians killed in crashes caused by illegal immigrants.

Cobb County deputy Loren Lilly was killed in 2006 just four months after he got married. His widow still remembers the day two deputies arrived at her door to break the news.

“It’s been six years now, but that is the moment in time that my life changed,” said Jamie Lilly Mullis.

Those pressing for illegal immigration reform say lawmakers should think about these and other victims and then take action.