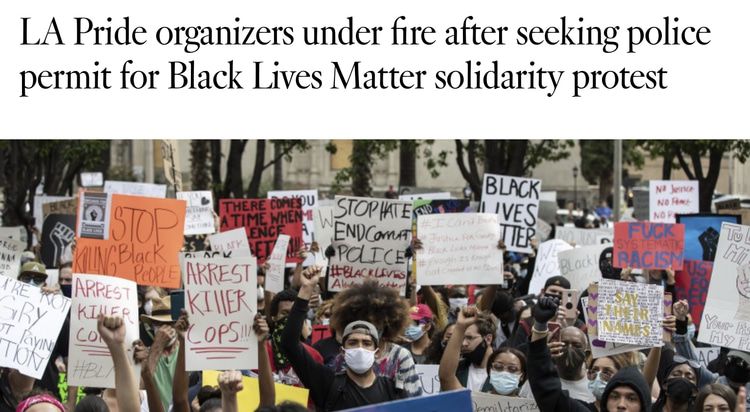 Gays Are Being Demoted on Intersectional Totem Pole

Pride Month is the holiest season on corporate liturgical calendar. Or it was until 2020. From the Los Angeles Times:

The organizers behind LA Pride’s solidarity march for black lives are being denounced for organizing the event collaboratively with the Los Angeles Police Department.

Festivities celebrating the 50th year of the city’s Pride parade had been suspended because of the coronavirus. But this week, organizers announced that they were planning a march in solidarity with Black Lives Matter for June 14, starting in Hollywood and ending in West Hollywood.

On behalf of Christopher Street West, the group that organizes Los Angeles’ Pride march, Jeff Consoletti, who runs an event production firm, submitted a special event permit application to the LAPD on Tuesday.

“For the past 50 years, we have demonstrated a strong and unified partnership with law enforcement in the annual organization of PRIDE here in Los Angeles and West Hollywood,” he wrote. “Your support of this peaceful gathering is the key to its success and continues a LA tradition of support, advocacy, and the peaceful right to protest for all.”

LGBTQ activists took to social media to point out that partnering with police goes against the intent of protests responding to the killings of George Floyd, Breonna Taylor, Tony McDade and others at the hands of police. …

On Friday afternoon, Consoletti posted an apology to Instagram and withdrew his involvement from the event. …

“I apologize and now see that these actions demonstrated the type of privileged, passive, and systemic issues that permeate society today,” he said in the post. “Our desire to stand with the Black Lives Matter movement was not carefully thought through. I am appreciative of the education I am receiving on how to be better and can see now that it is not right to take up space or attention from the conversation of racial inequality and the injustice Black people face from law enforcement.”

West Hollywood Mayor Lindsey Horvath told WEHOville that Christopher Street West had withdrawn its request to the city for a permit to stage the protest.