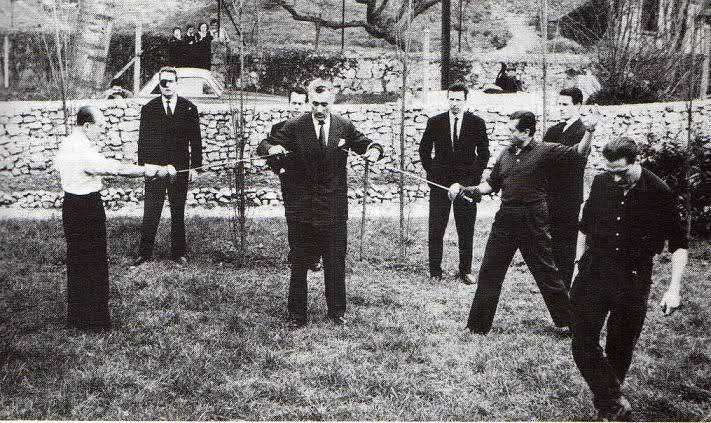 Musing on the strange new respect the National Front party led by Marine Le Pen has been getting lately, especially since it became public that Marine Le Pen’s young Karl Rove-like master strategist is gay, reader Harry Baldwin pointed out this 1958 Time Magazine article entitled “Gay Blades” about one of the last duels in French history. Le Pen in the black eyepatch

The current grand old man of the National Front, Jean-Marie Le Pen, served as second to the Marquis de Cuevas, the elderly ballet impresario, in his épée battle with the dancing master Serge Lifar, who had been a successor to Nijinsky at the Ballet Russe. Without the ferocity and punctiliousness of Le Pen to keep the affair going, the spat between the two aged homosexuals would likely have ended in a shameful reconciliation before the spilling of the drop or two of blood that honor demanded.

Wearing all his decorations and an opera cloak lined with white silk, the Marquis de Cuevas, 72, strode before the curtain of Paris’ Champs-Elysées Theater. Announced Cuevas: “I have received a letter forbidding my company to dance the ballet Black and White. I am not angry at France [the country of liberty], but at one man. The show will go on!”

While ballerinas floated through the intricacies of Black and White, the ballet’s choreographer. Russian-born Serge Lifar, 53, sat shaking with rage in a box beside France’s No. 1 model. Marie-Hélene Arnaud. Lifar angrily told his friends he had forbidden his ballet to the marquis because it was the exclusive property of the Paris Opéra, where Lifar is the top choreographer and dancing master.

At intermission, sighting Cuevas in the crowd. Lifar rushed up to him, theatrically flung a scented handkerchief at the marquis’ exquisitely shod feet. Painfully, the ancient marquis bent down, picked up the handkerchief, flourished it in Lifar’s face while photographers’ flashbulbs flared. Said a bystander: “I thought they were embracing.” Au contraire.

Mirrored Épée. After the performance, Dancer Lifar tossed his black locks in indignation, declared that he was challenging Cuevas to a duel. “Out of respect for his great age,” he would allow the marquis the choice of weapons. The marquis answered. “I wish I could choose the whip, to give him a good drubbing,” but decided on the more conventional épée.

While photographers and newsmen crowded his swank Faubourg St.-Germain apartment, Cuevas briskly flourished an épée in front of a gilt mirror—or as briskly as his rheumatism, poor eyesight and recently broken leg would permit. Lifar, in turn, exhibited his thrusts and parries to newsmen at a local fencing school, where he was practicing. …

Icy Reply. But neither man apparently had counted on the bloodthirstiness of his seconds. The marquis’ principal second, an ex-paratrooper named Jean-Marie Le Pen, who is a far-right-wing Deputy in the National Assembly, reported to Cuevas that there were no grounds for a reconciliation, told him: “I’ve just come from a meeting with Lifar’s seconds. We’ve decided not to tell either you or Lifar where the duel will take place, because you’re sure to blab about it. We’ll take you there at the last moment.”

At this news the marquis paled, objected feebly that the U.S. embassy (Chilean-born Cuevas is a U.S. citizen and married to a Rockefeller heiress)

and the French police were both opposed to the duel. Le Pen, who habitually carries a revolver and a dagger to protect himself from Algerian terrorists and other menacing elements, replied icily: “Surely, you do not wish to engage a French officer and a Deputy in an affair of honor which will degenerate into a farce?” 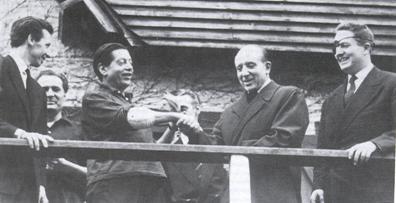 At week’s end the dawdling duelists finally faced each other in the garden of an estate 50 miles from Paris. Serge Lifar arrived bearing a Greek icon, a dagger, a pair of ballet slippers and a small potted plant (“These are my symbols—faith, honor, art and life”). After six minutes of sword waving, the Marquis de Cuevas got home a stroke, managed to pink Lifar on the forearm. The marquis burst into tears, collapsed on the brawny shoulder of his second, Le Pen. Lifar bounded lightly over to the weeping marquis, fell into his arms crying: “I knew it would end in an embrace!” Thirty reporters and photographers, who had covered every nuance of the affair of honor, packed up their equipment and went home.

In the newsreel video above, Jean-Marie Le Pen is the second in the eyepatch on the far left, while his principal, the Marquis, is the duelist in the white shirt.