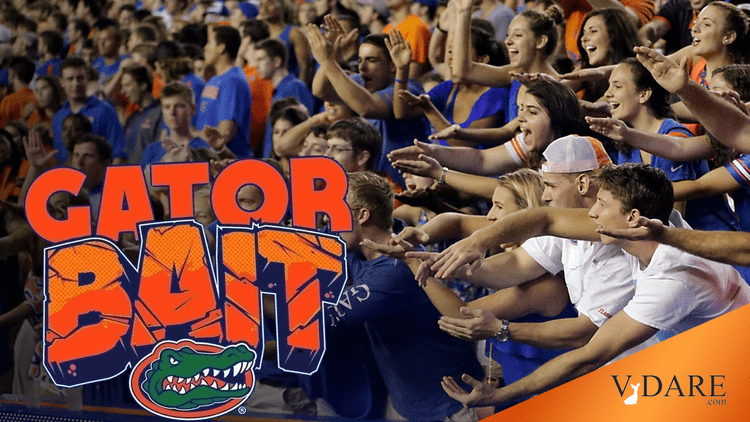 "Gator Bait" Today, Mount Rushmore Tomorrow: Despite No Evidence Of Racism, University Of Florida Drops Chant Because Of Claim

Tom Petty was from Gainesville, Florida. He once proudly showcased the Confederate flag in his shows, before he realized the error of his ways. He knew which way the wind was momentarily blowing.

So he buckled. He bowed .

And now, the University of Florida does the same.

ST. PETERSBURG, FLA. — The University of Florida is ending its “gator bait” cheer at football games and other sports events because of its racial connotations, the school’s president announced Thursday in a letter making several other similar changes on campus.

University President Kent Fuchs said in a letter to the university’s faculty, students and staff that the cheer has a “horrific historic racist imagery” involving African American people, especially children, being used as bait for alligators.

“Accordingly, university athletics and the Gator Band will discontinue the use of the cheer,” Fuchs wrote.

The university’s sports teams in the Southeastern Conference are nicknamed the Gators, for the ubiquitous Florida reptile. In the past, the school’s band would strike up a “gator bait” tune and fans would respond with their arms doing a chomping motion while shouting the slogan.

The link to racism is borne out by news articles in years past. For example, in 1923, Time magazine published a story about how “colored babies were being used for alligator bait” in Chipley, Florida.

“The infants are allowed to play in the shallow water while expert riflemen watch from concealment nearby,” the article said. “When a saurian (alligator) approaches this prey, he is shot by the riflemen.” The Chipley Chamber of Commerce responded to the Time article by calling it a “silly lie, false and absurd.”