Gangsters Claim Credible Fear of Other Thugs for Asylum

How stupid are judges to take the word of a stone-cold gangster that he has renounced a life of crime, particularly when the criminal gets a big payoff for the lie, er statement? But that’s what happened in a recent appeals court decision which could set a dangerous precedent.

Besides, if a gangster fears his MS-13 buddies, many of them reside in this country, so there would be no greater safety here than in the alien’s homeland.

KRIS KOBACH: “Once one case like this emerges, where an illegal alien is able to avoid deportation, particularly a criminal one like this guy, then the word spreads in the jails and in the prisons that to avoid being sent home you just have to renounce your gang membership like he did. I fear we’re going to see a lot of gang members all across the United States, illegal alien gang members, and these are very deadly gangs, doing what this guy did now and saying ‘you can’t deport me now.’

In fact, Mexican cartels and other unworthies are already aware of American legal squishiness, investigated in a House hearing last November about asylum fraud. The increase over the last couple years of “credible fear” asylum claims shows the scam. 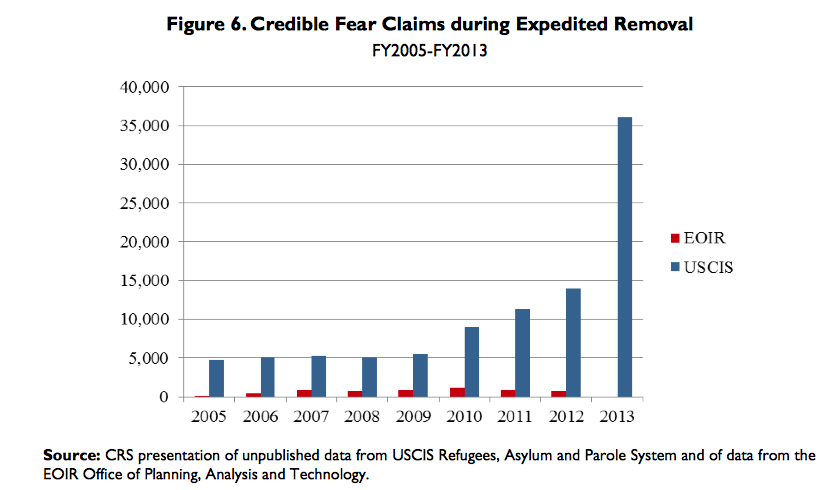 House Judiciary Chair Bob Goodlatte, along with Congressman Randy Forbes, wrote a letter to Attorney General Holder with their concerns about the danger to public safety that the case presents.

WASHINGTON, D.C. – House Judiciary Committee Chairman Bob Goodlatte and Congressman Randy Forbes (R-Va.) today sent a letter to Attorney General Eric Holder asking what the Department of Justice plans to do in light of a recent decision by the U.S. Court of Appeals for the 4th Circuit that could endanger our communities by allowing criminal gang members to receive asylum in the United States or withholding of removal by simply claiming that they have renounced their membership in the gang. In the case of Martinez v. Holder, the court ruled that Julio Martinez, an unlawful immigrant from El Salvador, could stay in the United States because he renounced his membership in the notoriously deadly MS-13 gang and returning to El Salvador could jeopardize his safety. This decision encourages fraud and creates a new loophole where gang members can simply claim that they are no longer a member of a gang in order to game the immigration system. This undermines the federal government’s ability to enforce our immigration laws and promote public safety.

Below are excerpts of the letter. To view the full letter, click here.

“We are concerned that based on this decision [by the U.S. Court of Appeals for the 4th Circuit], gang members will be able to receive asylum or withholding in the U.S., simply by telling immigration authorities that they have renounced their membership in the gang. In the Martinez case, an MS-13 gang member did just that. Surely it is likely that when gang members are placed in removal proceedings, they will claim that they are no longer a member of a gang and have renounced gang membership in an attempt to circumvent removal. Even aliens who have in fact left gangs were members of criminal organizations and do not deserve the protections of asylum or withholding.

“We are deeply troubled by this decision as it interferes with the Federal Government’s ability to effectively enforce our immigration laws. Decisions such as this are serious impediments to both the Department of Justice’s (DOJ) and the Department of Homeland Security’s (DHS) ability to promote public safety through the removal of deportable aliens who may be involved with organized criminal activity.

“It is no secret that criminal gangs are a continuing national problem … Current and former gang members should not be shielded by our asylum or withholding system. Indeed, the Committee has already marked up legislation, HR. 2278 – the SAFE Act, which clarifies that anyone who is or has been a member of a gang may not receive asylum or withholding on any grounds … While the Committee has done its part, we would like to know what DOJ plans to do to address this problem.”