Just a few items from the Email Bag.

In the Math Corner at the end of my March Diary I stated a theorem about divisibility and challenged readers to prove it. My proof is here.

Also in the March Diary I wondered if the reference to "Negro-head" tobacco in my 2003 Barnes & Noble Classics edition of Great Expectations, Chapter 40, was a bowdlerization of something slightly different in the 1861 original of that novel.

Several readers stepped up to that one.

Nothing to be sorry about, Sir, I just honestly wanted to know. 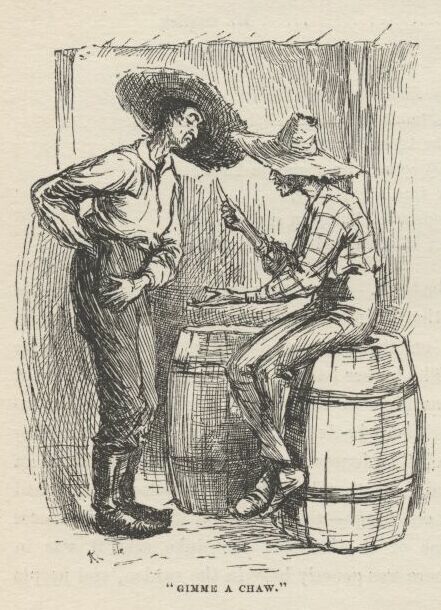 A different reader pointed out this, from Chapter 21 of Huckleberry Finn (Ctrl-F "chaws" here). Huck's giving us a description of the men hanging out in the streets of a one-horse town in the "State of Arkansaw":

Some of them kinds of loafers never has a cent in the world, nor a chaw of tobacco of their own. They get all their chawing by borrowing; they say to a fellow, "I wisht you'd len' me a chaw, Jack, I jist this minute give Ben Thompson the last chaw I had" — which is a lie pretty much everytime; it don’t fool nobody but a stranger; but Jack ain't no stranger, so he says:

"You give him a chaw, did you? So did your sister's cat's grandmother. You pay me back the chaws you've awready borry'd off'n me, Lafe Buckner, then I'll loan you one or two ton of it, and won't charge you no back intrust, nuther."

"Well, I did pay you back some of it wunst."

That string of asterisks is of course the Deplorable Word. Mark Twain, a country boy whose median attitude to the American common man of his day was amused tolerance, was very free with the Word. Charles Dickens, a rather stiff Englishman who disliked America and thought its inhabitants uncouth, would have aimed for a higher diction.

The Word was considered vulgar and low-class even among genteel antebellum Americans. A reader reminds me that Scarlett O'Hara in Gone with the Wind lets slip the Word thoughtlessly, but then immediately says to herself: "Oh, mother wouldn't approve of that." All right, that's a work of fiction: but the consensus of critics has been that on the manners and attitudes of well-bred antebellum Southerners, Margaret Mitchell got it right.

Much discussion of this from listeners following my April 9th observations on Radio Derb.  There are definitely a Sooner faction (me) and a Later faction (the Z-man).

I missed this one until a listener drew my attention to it: Tyler Cowen at Bloomberg, coming out as a Sooner.

I mentioned this in the April 9th Radio Derb. A listener who's lived in Japan tells me it is to laugh.

I chuckled when I heard about the proposal in Japan to try the 4-day work week.

They always have proposals and initiatives like this in Japan — to increase female workforce participation, compel salarymen to take their holidays, teach actual communication in school English Lessons etc.

The proposal always ends up on the desk of the old man in charge (a hard copy is literally placed there because he can't use email) and after a very long delay he says "no."

In my time living in Japan I witnessed this several times.  In one case I was asked to proof-read the English tourist guide for my region, which I took seriously and made sure to perfect.  After six months, the boss of the tourism department changed my corrections back again.  When you see Engrish everywhere in Japan, this is the reason.

This is also why many hotels don't allow online bookings or require a workplace phone number, most bills must be paid in person, and so on.

Many Japanese are open to reform but the people in charge are old men from Meiji-era families who have reached their lofty position by never having an original idea in their lives so they aren't about to start now.

The saying in Japan is, "Everything must improve but nothing may change."

Time does not improve the situation because as each old man retires or is exposed in some scandal, he is replaced by the next chap in line, the "new old fool."  Another Japanese phrase.

Not sure how closely you've been following the story of the gap-toothed, Trump-voting, Radio Derb-listening white supremacist who rammed into the cops in the Capitol, but I think insufficient attention has been paid to one aspect of it: his statement that, according to the New York Times, "he had recently left his job and been 'faced with fear, hunger, loss of wealth and diminution of fruit.'"

Say what? "Diminution of fruit"?  This appears to be from the Arberry translation of the Koran, verse 2:155:

"Surely We will try you with something of fear and hunger, and diminution of goods and lives and fruits; yet give thou good tidings unto the patient."

Thanks, pal. That got me wondering: do Muslims have a thing about fruit? Was there not a black-Muslim offshoot calling itself "Fruit of Islam"? (Which of course writes its own jokes. IIRC some wag proposed starting a "Vegetables of Jesus" Christian group ... but that may be my mind playing tricks.)

I signed off the April 9th Radio Derb with a musical version of the poem. That brought the following curious reminiscence from a listener:

Your closing song for your April 9 Radio Derb brought back a memory.

When I was a cadet at the US Air Force Academy, part of my baseline training was a three-week block of Survival, Evasion, Resistance, and Escape (SERE). The Resistance phase consisted of spending time in a purpose-built POW camp. We were warehoused most of the time in solitary cells (a 5' x 5' plywood room with a high ceiling and a concrete floor) with no furniture save a "Peoples Chair," which was two 2x4s nailed together to form a capital "T". The stem of the T was on the floor and we sat on the cross member. We were not permitted to sleep or sit or lie on the floor, and if caught there during random peephole checks, we were taken out of the cell and roughed up by the guards.

The purpose of the solitary cells was to soften us up for our interrogations. One of the softening-up techniques the camp staff employed was to pipe in music or propaganda speeches. Kipling's poem was one of the samplings, only it wasn't sung by a pleasant baritone with an orchestral background. Rather, it was spoken by the most atonal, monotonous voice imaginable. Think Boris Karloff intentionally trying to be as boring as possible and you're close to the effect.

They'd play this on a continuous loop for hours. That poem became something of an anthem among the cadets for yet another of many traumatic experiences suffered by us.

Good grief! That would have been too much Kipling even for me.