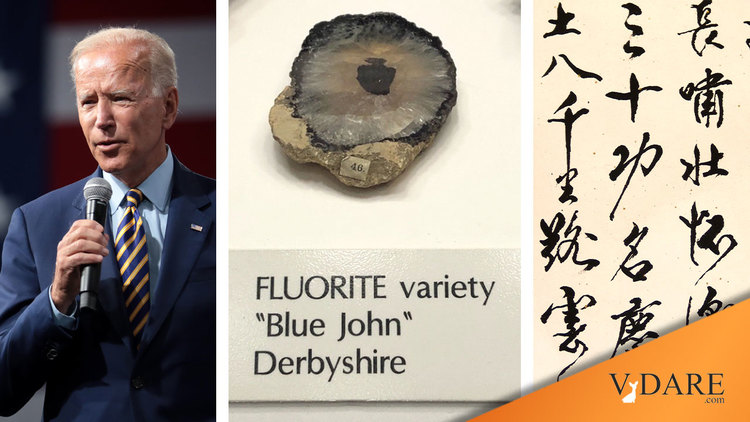 From Derb's Email Bag: May Brainteaser, Derb Stoned, And The Chinese "The"

• May brainteaser.  My worked solution here. Thanks to the reader who sent me this neat little example of classical geometry.

A bulletin from our federal Department of Justice Office of Public Affairs, dated January 2nd …

Much less excusable was my having Shakespeare's Henry the Fifth urging his troops to "Cry God for Harry, England, and Saint George!" at the Battle of Agincourt, rather than Harfleur. I felt sufficiently bad about that to put a correction in the transcript (i.e. of the May 28th podcast).

• Derb stoned.  A sharp-eyed correspondent noticed this specimen in the geological section of Pittsburgh's Carnegie Museum. 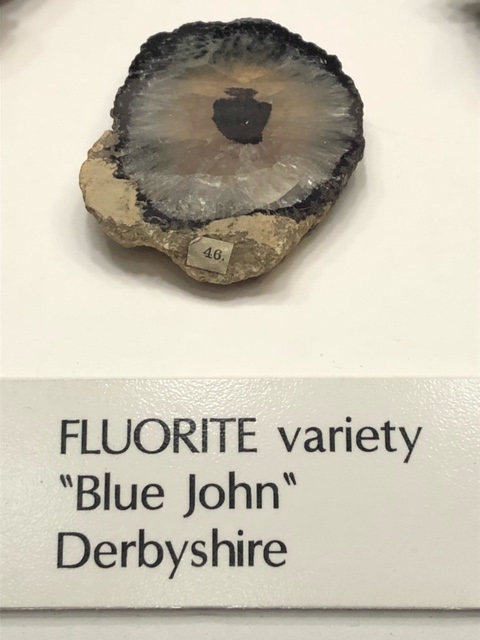 You should approach any official ChiCom source with the assumption you are being lied to. Every word the ChiComs say is a lie.

(I was going to append the traditional quip: "including 'and' and 'the'"; but the word for "and" in Chinese is hardly used, and the language doesn't have a word for "the" at all.)

That left a listener perplexed. He allowed that a language can get along without a "the," and many languages do—Latin, most obviously. Is it really the case, though, that "the word for 'and' in Chinese is hardly used"?

Well, I'm very far from fluent in Chinese, but that's how it seems to me. The actual word for "and" in Chinese is 与, pronounced yŭ, but it doesn't show up much, certainly nothing like as much as "and" does in English.

As a quick check, I went to the last page I bookmarked in any plain-text Chinese book (actually page 546 of this book). The page contains 514 characters of printed Chinese. Not one of them is 与. By way of comparison, I checked with the last full page of a plain-text English-language book I read (page 224 of Ann Patchett's novel Bel Canto): 391 words, twelve of them "and."