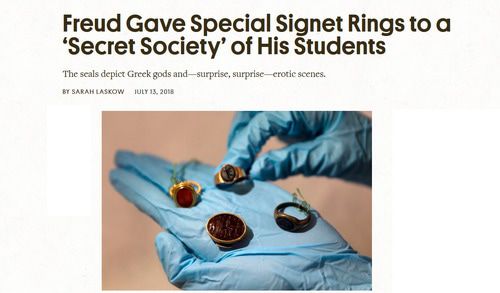 Freud Of The Rings: The Secret Society Of Freudian Insiders

Deep in the collection of the Israel Museum, in Jerusalem, the assistant curator Morag Wilhelm found a small cardboard box. Inside, the AFP reports, was a gold ring set with a small ancient seal. The box was labeled “Freud Nike.”

It had belonged to Eva Rosenfeld, a psychoanalyst who grew up in Germany and settled in Vienna. She became close with Anna Freud, the daughter of Sigmund Freud and a psychoanalyst herself. As their relationship deepened, Rosenfeld became a patient of Anna’s father. The ring was a symbol of his connection to her—he handed them out only to his closest associates and students…

… These six rings represent only a part of the small group of rings Freud gave out. There are at least 20 altogether; perhaps this exhibit will prompt their owners to reveal their whereabouts.

Just keep repeating: the reason Freudianism was so massively influential for much of the 20th Century was because it was a scientific breakthrough and was not at all some weird cult. And there are no lessons whatsoever to be learned about currently fashionable ideas from the rise and fall of Freudianism. In fact, just forget you ever heard about Freudianism. Instead, let’s obsess some more about the history of eugenics, like you’ve been told.

Nine rings for neurotic men, doomed to kvetch,
Seven for the psychoanalysts in their Manhattan offices,
Three rings for the Shrink-Lords under Viennese skies,
One ring to rule them all,
One ring of power,
One ring to bring them all,
And charge them by the hour.