The turnout was good for the Saturday march in Paris, as a variety of concerned French citizens protested Muslim violence, sharia and cultural incursion in France.

The protesters’ banner reads, ‘Islamic fascism shall not pass” 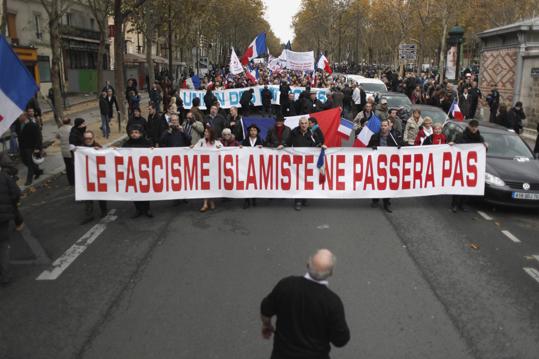 Winds of Jihad posted a message from Rita, who was a participant:

AT LAST!!! It’s the first time since I saw all those Arab/Islamist flags at the Place de la Bastille Paris, in celebration of the socialist election win in May 2012, that I can hope again: perhaps France is not lost after all. These are the first pictures (the big medias will ignore them at best but more likely distort the messages of course) of the anti-islamist, anti-sharia, pro-freedom for France march against the Islamist fascism, organised by my friends Pierre Cassen from “Riposte Laique” and Christine Tasin from “Resistance Republicaine”. [. . .]

Here’s the report from AP:

Hundreds of French nationalists have demonstrated in Paris against Islamist extremism, chanting the French anthem and saying the religion has no place in the country.

Protester Romain Cyiril says, “France was always a welcoming country, but for the first time we have to deal with a religion which can’t and doesn’t want to integrate itself.”

Three weeks ago, dozens of far-right French activists stormed an unfinished mosque to protest immigration policies that have made France home to Western Europe’s largest population of Muslims. There are an estimated 5 million or more Muslims in this nation of 65 million, although under French law the government does not track religion.

Saturday’s protest was organized by a nationalist group called the Republican Resistance.