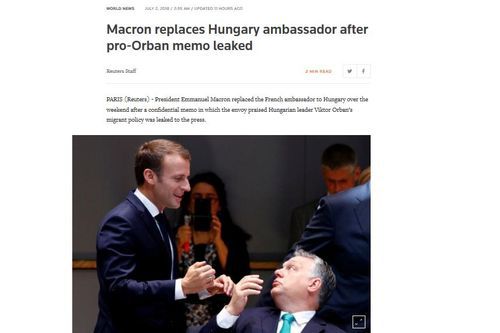 It's become something of a cottage industry for the leftist media to champion various American ambassadors who keep embarssing the Trump Administration by siding with foreign interests instead of their own government.

For example, former US Ambassador to Mexico Roberta Jacobson, who resigned in May, was hailed by several outlets for suggesting enforcement of immigration laws is "un-American."

Yet as Morton Blackwell says, it's important to remember the other side has troubles too. French president Emmanuel Macron had to replace his country's ambassador to Hungary after Eric Fournier made the mistake of noticing how Hungary was avoiding Western Europe's Muslim problem by preventing mass immigration.

In the confidential note dated June 18, which was addressed to Macron’s office and was published by investigative website Mediapart, Fournier said Hungary was a “model” for dealing with migrants and that accusations of populism against Orban were media fabrications.

The former ambassador also wrote that French media, by accusing Hungary of antisemitism, were seeking to distract attention from the “real antisemitism” coming from “Muslims in France and Germany”.

Asked about the note on Friday, Macron said he did not share the ambassador’s views and that the confidential note did not represent official French policy.