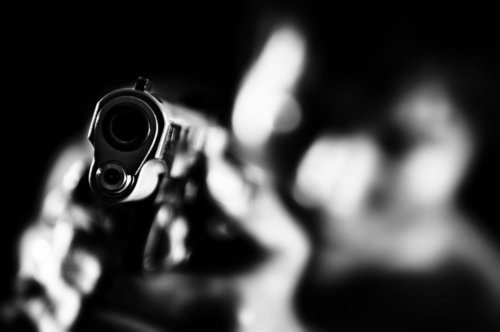 Several days ago, John Derbyshire wrote at VDARE.com (That Laquan McDonald Shooting In Chicago: A Counter-Take) about the vulnerability of a police officer facing a prospective, knife-bearing assailant at distances below 20 feet.

Well, what if the prospective assailant has a gun—or might have a gun?  Veteran reporter (including the police beat in various populous American cities) Fred Reed, who is currently cross with VDARE.com, wrote about this memorably at his own website 14 years ago (Why Cops Shoot: Test Yourself in a Dark Alley, May 22, 2001).

Here's his opening and simplest scenario:

First (and for a variety of reasons I don’t suggest trying this should the occasion arise in real life), have a friend stand in front of you and point his finger at your chest as if it were a gun. Hold your hands at about shoulder height, as if he had said, “Hands up!” Tell him to shoot instantly if you move. Then, as fast as you can, without warning, try to knock his hand away.

He will never be able to pull the (imaginary) trigger before you hit his hand.

And here is his closing scenario and conclusion:

As a final experiment, have [your friend] stand ten feet away from you with his back turned to you and his hands in front of him. Assume that he is a suspect fleeing from you down an alley, and finds that it is a dead end. Have him hold two different objects in his hands — say, his wallet and his cell phone. The cell phone, let us say, is a gun.

Point your “gun” at him. Say “Hands up!” if you want. His job is to turn quickly toward you, with either the wallet or the cell phone in his gun hand. If he has chosen to turn with the “gun,” he should shoot you as quickly as he can.

Your job is to decide whether he is holding the “gun” or the wallet, and either shoot, or refrain from shooting, as appropriate. Have a body bag ready, because, if he turns with the gun, you won’t have a prayer.

If you want, try it with a Day-glo pink plastic banana and a realistic plastic gun. For that matter, have him turn either holding the cell phone or holding nothing. The results will be the same. The arithmetic of reaction time says that you cannot look at an object, decide what it is, and take action before he shoots. The one who acts first not only has the advantage of reaction time, which in itself would be enough to shoot first, but also the time needed for you to decide what to do. Not even close.

Think about trying it in a dark alley, after sprinting a hundred yards, chasing a criminal who as a matter of statistical fact is quite likely to be armed, but may not be. Very likely, someone will die: You, because it was a gun and you waited to see, or him, because, gun or not, you didn’t wait.

These "Reed scenarios" are something to have in mind for when you encounter uninformed kibitizing about how "the cop should have just shot the gun out of the thug's hand."  Et cetera.  Et cetera.

Between October 1998 and October 2001, Reed wrote close to 100 police-beat columns, reporting mostly from Washington, DC but also from Chicago, Denver, and elsewhere.  They portray a fascinating and sobering slice-of-urban-life.

When I grew up in Chicago, Jay's potato chips were popular, and their advertising slogan was "Can't Stop Eating 'Em."  With Reed's "Cop Columns," it's "Can't stop reading 'em."