Representative Chris Van Hollen (D-Chevy Chase, MD) holds the single most desirable Democratic seat in the House, representing the posh suburbs starting at the northwest border of the District of Columbia. No need to maintain two homes and rack up the frequent flier miles.

His father was some kind of Deputy Assistant Secretary of State and his mother was in the CIA.

And the high-ranking Democrat with the impressive resume looks like a President of the United States as played by a veteran movie star. But maybe looking like a guy who’d get cast as the Chief Executive in a thriller movie, a cross between Dennis Quaid and James Caan, isn’t what the Democrats are looking for these days? The problem for the Democrats is that Van Hollen’s career path to the national ticket has to go through a Democratic Senatorial primary in Freddie Gray’s hometown. 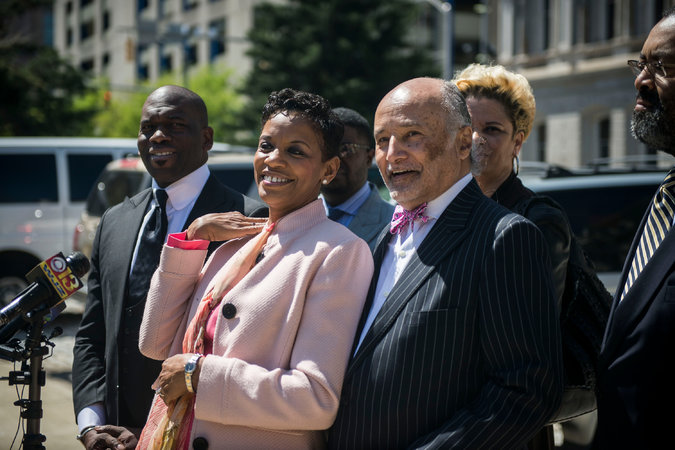 Representative Donna Edwards spoke last week outside City Hall in Baltimore with Billy Murphy, lawyer for the family of Freddie Gray, a 25-year-old black man who died of injuries sustained while in police custody.

BALTIMORE — On Capitol Hill, Representative Chris Van Hollen is, literally and figuratively, a Democratic fair-haired boy. An American son of diplomats born while his parents served in Pakistan, he has used his fund-raising savvy, policy smarts and easy manner to position himself, party elders assumed, as a potential Democratic speaker of the House.

Instead, Mr. Van Hollen, now running for the Senate in his home state of Maryland, is fighting for his survival in an identity politics primary that raises an explosive question: Should a white man, or a black woman, inherit the seat held for 30 years by Barbara A. Mikulski, the longest-serving female senator in American history?

The contest between two members of Congress — the low-key Mr. Van Hollen, who trumpets his legislative résumé, and Representative Donna Edwards, a onetime community activist and African-American single mother — has exposed deep fissures among Democrats as it traverses thorny issues of gender, race and class.

… Shaking hands and snapping selfies outside an early voting center here Tuesday night, she offered a succinct rationale for her candidacy: “The Senate is 100 members — 20 women. There’s nobody in the Senate like me.”

As to the uproar over the push by Emily’s List, Ms. Edwards said she was mystified: “I’m a pro-choice Democratic woman, and Mr. Van Hollen is not.”

Mr. Van Hollen, who helped muscle President Obama’s health care legislation and other high-priority bills through Congress as the right-hand man to the House Democratic leader, Nancy Pelosi, the former speaker, cannot exactly argue with that. He is a 57-year-old white man in a party that has a core coalition consisting of minorities, single women and young people. …

Analysts say black women will decide the race. Perhaps nowhere is the fight for their votes as fierce as here in Baltimore, a majority black city that is about to choose its next mayor. Next week — one day after Tuesday’s Maryland primary — the city will mark the one-year anniversary of the unrest over the death of Freddie Gray. The memory of the 25-year-old black man, who died of injuries he sustained while in police custody, hovers over both races. …

The congressman, doing his best to avoid race and gender questions, reminded the crowd that he has Baltimore ties (his father grew up here) and of his attention to constituent service. He stiffened slightly when asked if the Senate needs a black woman’s voice.

Those who endorsed him, he said, can speak for themselves: “They want somebody with a track record of delivering real results.”

There has not been a black woman in the Senate since Carol Moseley Braun, the nation’s first and only black female senator, left in 1999. In California, Emily’s List is also backing Kamala Harris, who is black and Asian-American, for a Senate seat this year. Here in Maryland, a Monmouth University poll released on Thursday showed Mr. Van Hollen pulling ahead in what has been a tight race with voters, especially women, and starkly divided along racial lines.

“This is the state that Harriet Tubman ran away from twice and Frederick Douglass ran away from at least once, and we’ve never had a black woman elected statewide,” said Benjamin Jealous, the former president and chief executive of the N.A.A.C.P., who supports Ms. Edwards, though he insisted it was for policy reasons, not her race. …