The graphic above depicts nine human figures. How many are recognizably white?

The erasure of whites from drawings, photographs, commercials, TV shows and movies is part and parcel of the campaign to erase whites from the world. The word is genocide. Google is a leader in the race to a white Holocaust.

An excerpt from my April 2002 Middle American News report,“Picture This: September 11, Multiculturalism, and the War on White Male Heroes,” follows.

In recent weeks, Americans have been dramatically reminded of a development that in fact has been institutionalized for over thirty years in America: The war on white male heroes. Fought under the pretext that too many white faces makes blacks feel unwelcome, and that more black faces will raise black self-esteem and hence black achievement, the war on white male heroes has been a pillar of multiculturalism's (primarily Afrocentrism and feminism), anti-white race war. 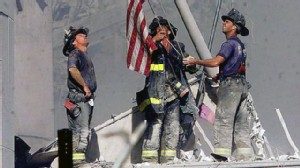 Billions of people around the world saw the picture of three white New York City firemen—Dan McWilliams, George Johnson, and William Eisengrein—raising the American flag at Ground Zero on September 11.That photograph was to be memorialized by a $180,000 bronze statue at Fire Department headquarters. However, Democratic Party fundraiser (and Clinton-crony) Bruce Ratner, who commissioned the statue, and FDNY honchos, decided there was a problem with the photograph: Too many white faces. The solution was to falsify the image, by turning one fireman into a black, and another into an Hispanic. As so often occurs in the war on white, male heroes, initially, the mainstream media refused even to report on the revisionist statue. On December 21, when New York City Fire Department officials announced the plan for the revisionist statue, NewsMax alone reported on it. Although a petition campaign totaling (for two petitions), at this writing, over 400,000 signatures, got the FDNY brass and Bruce Ratner to back down from their agitprop statue, for purely racial reasons, they do not plan on memorializing the three white firemen. (One on-line petition totaling 395,000 signatures as of this writing, has been started and maintained by Free Republic activist Jeff Head.)