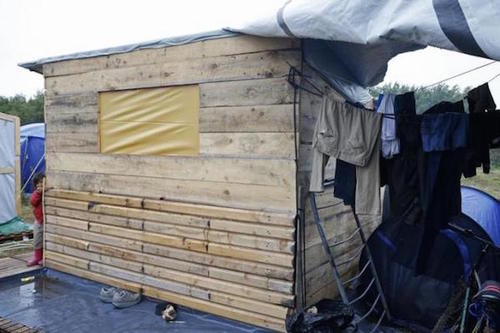 Calais Aliens Dig In for the Winter

As the weather turns cold on the western coast of France, illegal aliens in Calais are abandoning their tents and building more substantial structures to survive the winter. The place is turning from a camp to a shantytown.

Interestingly, some of the illegals appear satisfied to remain in the rough squatter camp they have constructed, particularly since they receive free food and other aid from charities, and Paris remains unwilling to deport them. The video below shows how helpful some French people are to the invaders.

In the Calais migrant camp where the stench of human excrement and bonfires of plastic waste taint the chilly sea air, a man in a polythene rain suit cycles on the spot, powering a dynamo to charge a mobile phone.

Of the 700,000 people who have reached Europe this year looking for peace and prosperity but lacking the papers to stay, the 6,000 living in the dunes on the northwest coast of France in hope of reaching Britain may be among the most determined and resourceful.

Yet simply staying warm, healthy, and in touch with loved ones is proving a challenge there as winter tightens its grip on the sprawl of tents and shanties.

There are families, young children, disabled people, and some who are making a living at the site, known locally as “the jungle”. Not everybody is trying their luck with the regular Russian roulette of cutting holes in fences, leaping on trucks and trains, and trying to walk the undersea tunnel.

Brwa, a 17 year-old Iraqi from Kirkuk, has been in the jungle for four months. He says he is the only member of his family attempting to go to Britain every night.

In his tent are his parents, his sister, her husband and a one-year old baby girl called Elia, who is sleeping.

“We use (canister) gas to heat the tent and everybody wants to come inside. The baby is always kept under blankets and a sleeping bag,” he says.

Kazhen, 27, who fled from Kirkuk in Iraq in September, is blind, and moves around with the help of his friends.

“So many people are catching a cold. We wear a lot of clothing,” he says.

“We have a fire place. We burn wood, plastic also… but it’s not good for health you know?”

Residents camping here are trying to reach Britain, which is in the European Union but outside its Schengen border-free travel zone. They believe they would have a better life there than in the EU countries on the European mainland.

Caravans, donated by local sympathizers, have taken the place of some tents. An Iraqi family with children aged 5 and 6 live in one. Inhabitants say there are now five mosques and three churches. Reuters saw one wooden mosque being built to replace a canvas one. Makeshift shops have popped up.

These signs of permanence have grown since the summer, but along with increased numbers, so has the sense of tension.

The man on the generator bicycle did not want to talk or be photographed. “No camera” said a sign over one of the shops nearby. Aziz Khan, 42, from Pakistan, would not say why the tent he is staying in has a sign saying ‘Hotel’ hanging on it.

Voluntary workers say the increasing cold and heightened security have made the camp more tense. So has the way nationalities have been thrown together by their common plight.

Sudanese are the biggest nationality group in the camp, according to aid workers. Many of the shops selling drinks, SIM cards and razors are run by Afghans, volunteers say.

DEADLY JOURNEY Dangerous attempts to climb on vehicles and trains or walk through the channel tunnel to Britain go on, despite the increasingly tight security, and even though 16 people have already died in the attempt since June.

“At night, we try lorries, trains, everything,” says Dyar, 24, an Iraqi who says he fled Islamic State in Mosul.

Khan, the Pakistani man outside the ‘Hotel’ tent, says he arrived in the jungle around two months ago after two years of travel from through Iran, Turkey, Bulgaria, Serbia, Hungary, Austria, Italy and France.

He says he used to be an aerospace engineer and served in the Pakistan Air Force for 18 years.

His feet are bruised.

“I was crossing the fencing to go to the train. We have to cross fencing and hide from the police. People break their legs or their arms.”

Claudine André, who runs a Doctors Without Borders post at the camp, says fractures, sprains and other injuries are among the 90-100 cases her team treats every day, along with respiratory infections and scabies from unsanitary conditions.

“Medical need is going to grow because patients are getting cold,” she says. “There could be pneumonia. We are trying to improve sanitary conditions by collecting rubbish, but there will be more and more need. There will have to be a re-think. There are more and more tents.”

France announced plans in August to build better shelters for as many as 1,500 migrants. That was before the official count doubled to 6,000.

Pas-de-Calais department prefect Fabienne Buccio says these will take the form of used shipping containers, since the area’s sand dunes cannot take traditional foundations. In the event of a cold-snap, she can quickly commandeer a gymnasium or other building, she says.

The Calais migrants are a small group in the overall influx of people seeking sanctuary from war and poverty, most of whom are entering the European Union at its eastern and southern borders while others are stuck in camps outside the bloc’s frontiers.

But as a western outpost of the crisis, the Calais camp has become its focus for France and Britain, where fears that immigrants will suck up public resources and overwhelm local culture are helping extreme right political parties grow in popularity.

In Britain, immigration is a central issue in an “in or out” referendum on whether to remain part of the EU that is due to be held by the end of 2017.

The governments of both countries have been reluctant to do anything that might encourage more people to come to Calais. The conditions at the camp have nevertheless also been criticized in both countries inhumane.

On Saturday, projectiles were thrown at police outside King’s Cross St Pancras station, the London terminus for trains from France, during a protest organized to highlight the plight of the migrants.

Back in the jungle, Brwa, the teenager with the baby niece, says he has an uncle who owns a grocery shop in Liverpool.

Family connections are among the reasons migrants want to reach Britain. A perception that casual work is easier to get there than elsewhere in Europe is another.

“My target remains England. I speak English so I can tell my story,” says Dyar, the Iraqi from Mosul. “People need to understand we are not here to invade any country. We are here to have a life.”