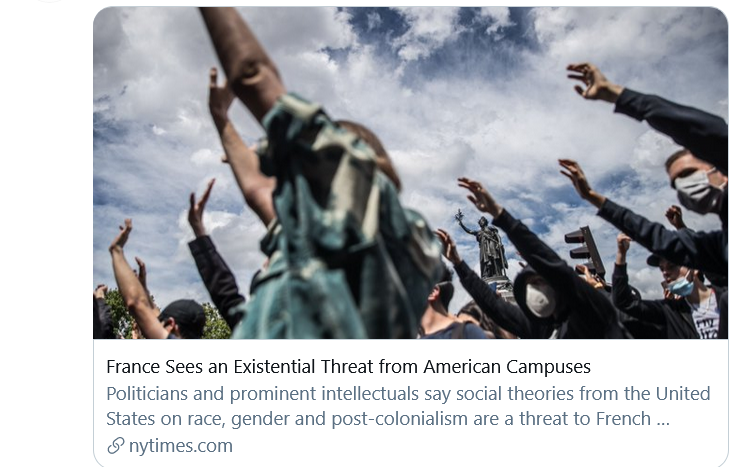 France's Fear Of A Black Planet 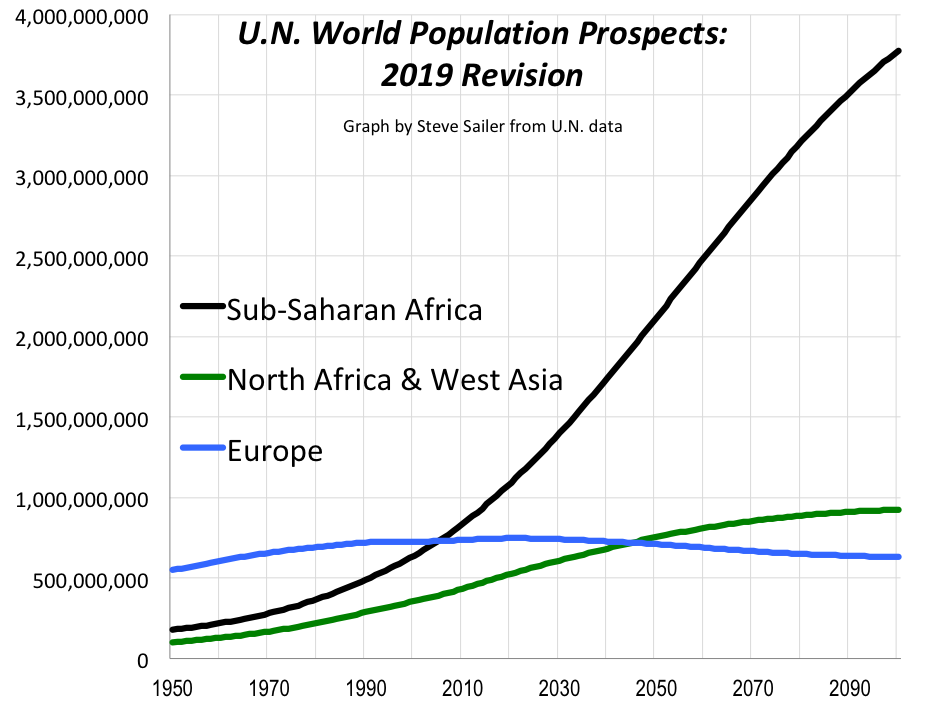 Politicians and prominent intellectuals say social theories from the United States on race, gender and post-colonialism are a threat to French identity and the French republic.

PARIS — The threat is said to be existential. It fuels secessionism. Gnaws at national unity. Abets Islamism. Attacks France’s intellectual and cultural heritage.

Emboldened by these comments, prominent intellectuals have banded together against what they regard as contamination by the out-of-control woke leftism of American campuses and its attendant cancel culture.

Pitted against them is a younger, more diverse guard that considers these theories as tools to understanding the willful blind spots of an increasingly diverse nation that still recoils at the mention of race, has yet to come to terms with its colonial past and often waves away the concerns of minorities as identity politics.

Nobody in America, being protected by the Atlantic Ocean, has yet noticed the World’s Most Important Graph. But the French are very concerned about what the population explosion in sub-Saharan Africa. Combine the raw material of billions of additional sub-Saharans, many of them intent on crossing the Mediterranean, with the anti-white black supremacist dogmas of American universities and, yeah, the term “existential threat” is not an exaggeration in the long run for France.

…The publication this month of a book critical of racial studies by two veteran social scientists, Stéphane Beaud and Gérard Noiriel, fueled criticism from younger scholars — and has received extensive news coverage. . …

The fierce French debate over a handful of academic disciplines on U.S. campuses may surprise those who have witnessed the gradual decline of American influence in many corners of the world.

Huh? I’d say that when the death of a fentanyl-abusing bouncer in Minneapolis leads to riots around the world, American influence is riding high.

… Mass protests in France against police violence, inspired by the killing of George Floyd, challenged the official dismissal of race and systemic racism.

… Some saw the reach of American identity politics and social science theories. Some center-right lawmakers pressed for a parliamentary investigation into “ideological excesses’’ at universities and singled out “guilty’’ scholars on Twitter.

Mr. Macron — who had shown little interest in these matters in the past but has been courting the right ahead of elections next year — jumped in last June, when he blamed universities for encouraging the “ethnicization of the social question’’ — amounting to “breaking the republic in two.’’

“I was pleasantly astonished,’’ said Nathalie Heinich, a sociologist who last month helped create an organization against “decolonialism and identity politics.’’ Made up of established figures, many retired, the group has issued warnings about American-inspired social theories in major publications like Le Point and Le Figaro. …

France has long laid claim to a national identity, based on a common culture, fundamental rights and core values like equality and liberty, rejecting diversity and multiculturalism. The French often see the United States as a fractious society at war with itself.

But far from being American, many of the leading thinkers behind theories on gender, race, post-colonialism and queer theory came from France — as well as the rest of Europe, South America, Africa and India, said Anne Garréta, a French writer who teaches literature at universities in France and at Duke.

“It’s an entire global world of ideas that circulates,’’ she said. “It just happens that campuses that are the most cosmopolitan and most globalized at this point in history are the American ones. ’’

The French state does not compile racial statistics, which is illegal, describing it as part of its commitment to universalism and treating all citizens equally under the law. To many scholars on race, however, the reluctance is part of a long history of denying racism in France and the country’s slave-trading and colonial past.

“What’s more French than the racial question in a country that was built around those questions?’’ said Mame-Fatou Niang, who divides her time between France and the United States, where she teaches French studies at Carnegie Mellon University. …

Pap Ndiaye, a historian who led efforts to establish Black studies in France, said it was no coincidence that the current wave of anti-American rhetoric began growing just as the first protests against racism and police violence took place last June.

“There was the idea that we’re talking too much about racial questions in France,’’ he said. “That’s enough.’’

Three Islamist attacks last fall served as a reminder that terrorism remains a threat in France. They also focused attention on another hot-button field of research: Islamophobia, which examines how hostility toward Islam in France, rooted in its colonial experience in the Muslim world, continues to shape the lives of French Muslims.

Abdellali Hajjat, an expert on Islamophobia, said that it became increasingly difficult to focus on his subject after 2015, when devastating terror attacks hit Paris. Government funding for research dried up. Researchers on the subject were accused of being apologists for Islamists and even terrorists.

Finding the atmosphere oppressive, Mr. Hajjat left two years ago to teach at the Free University of Brussels, in Belgium, where he said he found greater academic freedom.

“On the question of Islamophobia, it’s only in France where there is such violent talk in rejecting the term,’’ he said.

Mr. Macron’s education minister, Jean-Michel Blanquer, accused universities, under American influence, of being complicit with terrorists by providing the intellectual justification behind their acts.

A group of 100 prominent scholars wrote an open letter supporting the minister and decrying theories “transferred from North American campuses” in Le Monde.

A signatory, Gilles Kepel, an expert on Islam, said that American influence had led to “a sort of prohibition in universities to think about the phenomenon of political Islam in the name of a leftist ideology that considers it the religion of the underprivileged.’’

Along with Islamophobia, it was through the “totally artificial importation’’ in France of the “American-style Black question” that some were trying to draw a false picture of a France guilty of “systemic racism’’ and “white privilege,’’ said Pierre-André Taguieff, a historian and a leading critic of the American influence.

Mr. Taguieff said in an email that researchers of race, Islamophobia and post-colonialism were motivated by a “hatred of the West, as a white civilization.’’

“The common agenda of these enemies of European civilization can be summed up in three words: decolonize, demasculate, de-Europeanize,’’ Mr. Taguieff said. “Straight white male — that’s the culprit to condemn and the enemy to eliminate.”

French intellectuals are pretty good at discerning the underlying logic of ideas.