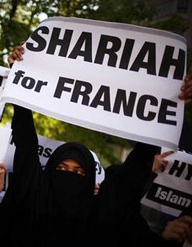 The numbers are still a little sketchy, but there is no question that Muslim immigrants were a big factor in Socialist Francois Hollande’s win. A huge majority of Islamic voters wanted an open-borders pro-Islam politician in charge.

The experience of France — of weeks of nationwide rioting in 2005, violent attacks against free speech, Islam-based mass murder, offensive territory-marking street prayer — is another example that unwise immigration diversity has bad consequences. Now we see the results at the ballot box as demographic change increases.

93 Percent Of French Muslims Voted For Hollande, Business Insider, May 8, 2012

According to a survey of 10,000 voters conducted by Opinionway for Le Figaro (not online), 93 percent of French Muslims voted for Francois Hollande in the second round of the French election, La Vie reports.

Another poll put Muslim support for Hollande at 85 percent.

A prior Opinionway survey showed that 59 percent of Muslim voters (numbering about two million in total) voted for Hollande in the first round of the French elections, with Sarkozy only managing four percent. [. . .]

And why wouldn’t Muslim immigrants vote for the Socialist? Hollande targeted them in his campaign by using a rap song that celebrated their presence:

Could a song by Jay-Z and Kanye West help improve the image of French presidential candidate Francois Hollande?

Jay-Z and Kanye West’s recent hit “Niggas in Paris” is about them. They rap about being so phenomenally rich, about how they “ball so hard,” buy Rolexes and cars, pop gold bottles with models in Paris nightclubs, that the rest of us slobs couldn’t fathom their lives.

It may seem like an odd choice for a campaign song for a politician trying to appeal to oppressed racial and ethnic minorities.

But it’s apparently working for — or at least not hurting — Francois Hollande. The French Socialist eked out a win last Sunday in the first round of presidential voting to decide who will run France for the next five years. He will face President Nicolas Sarkozy in a run-off May 6.

This month, Hollande appeared in a slickly edited online video featuring West and Jay-Z’s stadium anthem. In the video, Hollande — who has been roundly criticized for his lack of charisma — strides like a rock star amongst his black, Arab and multiethnic supporters in the working-class suburb of Creil.

“Got my niggas in Paris, and they going gorillas,” West raps as Hollande is shown leading discussions between men in suits and then talking to voters of multiple races and ages. Crowds in the street and the subway smile excitedly as Hollande approaches them.

Supporters raise their voter cards to the camera. A man shouts, “To hell with Sarko!” – a common shorthand reference to Sarkozy.

Galliawatch also concurs that the Muslim vote was decisive:

As a reader has pointed out, the French did not put Hollande in office, the Muslims did. With the final tally showing that 1,131,067 votes separated the two candidates, and that 93% of the 2 – 3 million Muslim votes went to Hollande, it is fair to say – in a manner of speaking – that Nicolas Sarkozy won. He would have won had there been no Muslims, but since he was one of the major promoters of the Islamization of France, he not only reaped what he sowed, but the whole country will now be forced to pay an incalculable, never-payable price for his stubborn resistance to reality.

The majority of the French people have been fruitlessly voting for what they thought was the “Right”, ever since Jacque Chirac’s first election in 1995. For almost twenty years, concerned French citizens have been trying to elect a government that would steer the country into safer waters, only to find that they put into office a group of impostors. [. . .]

Another Galliawatch post showed a photo of a current T-shirt and used its message as the title: “Before, Africa was yours, now France is ours”.