The big soccer World Cup has stirred up diverse immigrants around the world to cheer on their home country’s team. In southern California last Monday for example, five Mexicans were arrested in Huntington Park for rioting after a soccer win.

But in France, the violence experts of Islam went ballistic after the Algerian team beat South Korea. In fact, a kickball win threw them into a supremacist frenzy, repeating shouts of, “France is ours, France is ours!” as shown in the video below:

Below, Algerians rioted in Marseille. 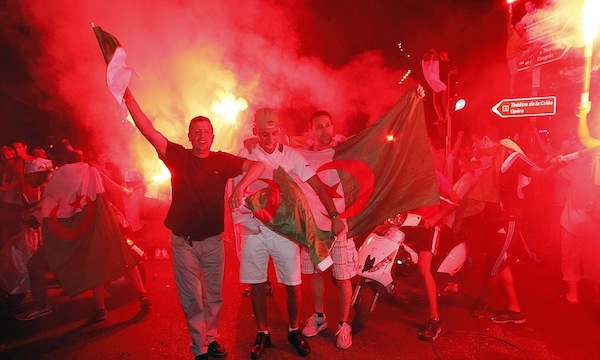 The ingratitude of immigrants in France has not gone unnoticed. Marine Le Pen, the leader of the Front Nationale party was angered at the criminal display of disloyalty and urged the policy of dual citizenship be ended.

Dual citizenship certainly is a vile practice, somewhat similar to polygamy in that what should be a primary loyalty is divided. John Fonte’s writing on the subject is very good, such as his 2005 CIS paper, Dual Allegiance: A Challenge to Immigration Reform and Patriotic Assimilation.

In France, the problem is acute, since Muslims are on average the worst immigrants on earth. Le Pen has the grit to say that assimilation in her country has been a “total failure,” and something needs to change

Celebrations after Algeria’s historic qualification for the second round of the football World Cup on Thursday turned violent in some French cities, leading to the arrests of 74 people for rioting and looting.

National Front leader Ms Le Pen said this showed “the total failure of immigration policies in our country and the refusal expressed by a number of binational citizens to assimilate.” She suggested those holding dual nationality should support France in international tournaments and not their country of origin.

“Now we must put a stop to dual nationality,” she told a talk show broadcast on French television and radio.

“What is clear is there is a not an insignificant number of people that are choosing Algeria over France,” Le Pen said. “You should pick: are you Algerian or French, Moroccan or French, but you cannot be both.” Joy erupted on the streets of France after the historic Algerian qualification, but in some parts of the country celebrations turned sour after clashes with riot police.

The central city of Lyon was particularly hard-hit, with shops looted, several dozen cars set on fire and firefighters assaulted, according to the interior ministry. END_OF_DOCUMENT_TOKEN_TO_BE_REPLACED