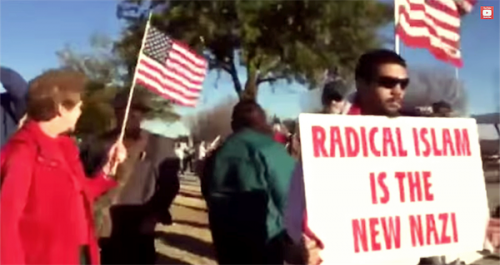 Jesse Watters from Fox’s O’Reilly show interviewed both the patriots and hijabbers.

Perhaps most revealing was the young koran fundamentalist who wants sharia law in the United States:

JESSE WATTERS: Seems to be a lot of turmoil in that part of the world, a lot of beheadings, stonings of women. Why is that tolerated in the Muslim world?

KORAN GUY: Because that’s what we believe. It says in the Koran that women shouldn’t be able to you know go out in public just you know wearing regular clothes.

JESSE: When women are allowed to live in Saudi Arabia, do you think that’s right?

KORAN: I just believe what the koran says because I’m a Muslim.

JESSE: So you believe in subjugating women because that’s what the koran says?

KORAN: Yes. That would be nice.

Maybe the koran guy will head off for Syria to act on his beliefs. Let’s hope.

At any rate, he demonstrated what a huge mistake Muslim immigration has been. America should stop admitting Muslims now before it’s too late.

Fox journalists were specifically barred from going inside to hear the Islam speakers even though Watters paid for his ticket and got credentials. Local media were admitted for the first 20 minutes to shoot footage and then were forced to leave.

The totalitarian culture of Islam is not appropriate for nations of free people.