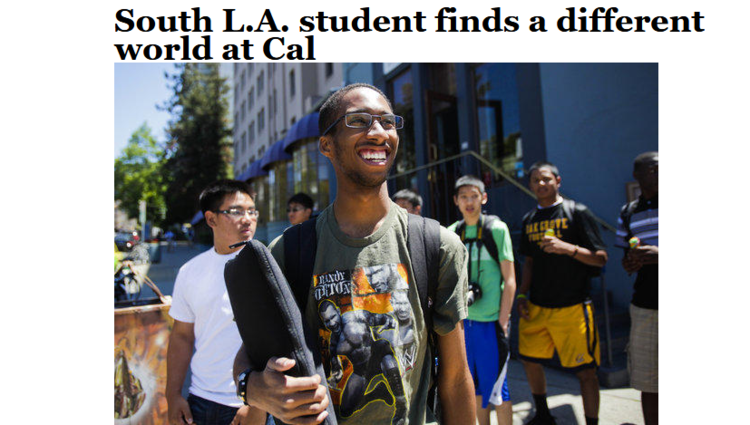 Thanks to all my readers who called attention to a long Los Angeles Times article by Kurt Streeter:

Kashawn Campbell grew up in one of the toughest neighborhoods in South Los Angeles. Yet he became a straight-A student at Jefferson High School. But at UC Berkeley, he found challenges far greater than he anticipated.

Education Realist offers the closest reading of the article and comes up, in so many words, with the most plausible interpretation: Kashawn is Forrest Gump, a sweet kid who may have suffered brain damage during a difficult birth, but whom everybody around him has conspired to make things easier for him ever since because he's so nice. For example, his 91% Hispanic school, Roosevelt High in South-Central, voted him Prom King. ER writes:

You know when a slight, geeky, weird guy with awkward social skills is voted most likely to succeed and prom king? When it’s an act of charity, an act that makes a group of tough kids feel good about themselves—that is, when the kid in question is “special”.

It's a heartwarming story. Of course, Forrest Gump was only a movie, and unless somebody gives Kashawn a bundle of Apple stock (Laurene Powell Jobs, I'm looking at you), it's not likely to turn out as well. Berkeley, for example, is not a nice college for nice but slow students.

California actually has a pretty good system, set up around the Sputnik Era, for how high school grads can go to community college, then, if they flourish, transfer to UC schools. But, that long slow path isn't as heartwarming for those around him looking for a quick self-congratulatory fix.