The topic for a Fox New segment on Wednesday was Maryland lawmakers seeking to raise the minimum wage to $15 dollars an hour. Andy Puzder, a former CEO of CKE Restaurants, the parent company of Carl’s Jr. and Hardee’s, warned that a higher minimum wage leads to increased automation and layoffs of human workers.

When wages are forced up through minimum wage legislation, Puzder explained that business owners “automate, and there are studies showing that automation really hurts young people, elderly people and African Americans. Competition is much more effective at driving wages up.”

The “Fight for $15” union movement to raise the minimum wage by law is actually harmful to workers by speeding the implementation of automation, like the table ordering tablet shown below. 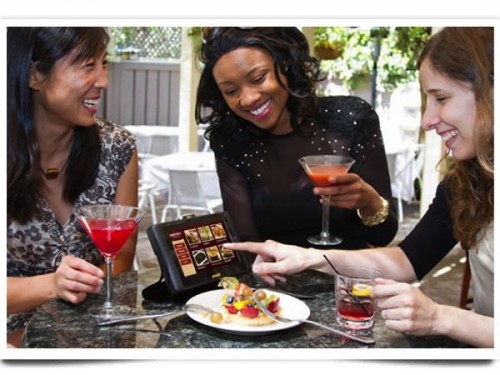 Knowledgeable Fox host Steve Doocy asked, “How many places have you been where there’s a fast food place and there’s an I-pad where you punch in your own order and it comes out in about 90 seconds. Here in New York City, they’re talking about replacing cashiers with that because the activists think they have some real leverage here when they actually don’t because it’s easier to buy an automated system than it is to hire people.”

Puzder responded, “For years it was more expensive to buy the machine, and you didn’t have the personal touch. Now, with millennials moving up and they do everything on their I-phones or digitally, you’re seeing more acceptance of these kiosks and they’ve come down in price, and because labor’s gone up, they’ve become more competitive, so McDonald’s and Wendy’s have announced they’re putting hundreds if not thousands in. Ruby Tuesday just laid off people in their restaurants, they’ve got on-the-table ordering. This is spreading fast and wide and it’s unfortunate because young people need those entry-level jobs. My first job was at Baskin-Robbins and, I tell you what, you learn so much in a short period of time.”

McDonald’s has chosen a standing kiosk for customers to place their orders. 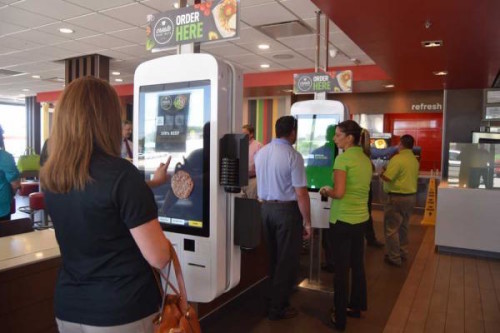 The move to automation will only speed up as smart machines get cheaper. Oxford researchers forecast in 2013 that nearly half of American jobs were vulnerable to machine or software replacement within 20 years. Rice University computer scientist Moshe Vardi believes that in 30 years humans will become largely obsolete, and world joblessness will reach 50 percent. The Gartner tech advising company believes that one-third of jobs will be done by machines by 2025. The consultancy firm PwC published a report last year that forecast robots could take 38 percent of US jobs by 2030.

Restaurant automation has other technologies coming online, like pizza makers, burger flippers and a robot that produces a gourmet hamburger start to finish.

As the former CEO of McDonald’s Ed Rensi observed a couple years back, “It’s cheaper to buy a $35,000 robotic arm than it is to hire an employee who’s inefficient making $15 an hour bagging French fries.”

And that robot arm is probably cheaper now.

With the automated future in mind, it makes no sense to continue immigration like it’s a century ago and America needed millions of workers. The intelligent number of immigrants is therefore ZERO. The RAISE Act that cuts immigration by half is a nice start but much more will need to be done.