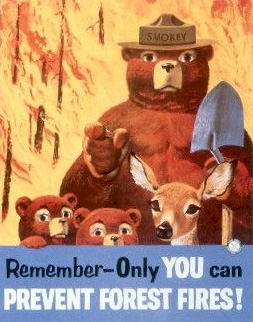 Those darn Muslims! They are nothing if not inventive in thinking up ways to mess with us hated infidels — as well as innocent woodland creatures like Bambi and Thumper, it turns out.

AUSTRALIA has been singled out as a target for "forest jihad" by a group of Islamic extremists urging Muslims to deliberately light bushfires as a weapon of terror.

US intelligence channels earlier this year identified a website calling on Muslims in Australia, the US, Europe and Russia to "start forest fires", claiming "scholars have justified chopping down and burning the infidels' forests when they do the same to our lands".

The website, posted by a group called the Al-Ikhlas Islamic Network, argues in Arabic that lighting fires is an effective form of terrorism justified in Islamic law under the "eye for an eye" doctrine.

The posting - which instructs jihadis to remember "forest jihad" in summer months - says fires cause economic damage and pollution, tie up security agencies and can take months to extinguish so that "this terror will haunt them for an extended period of time".

"Imagine if, after all the losses caused by such an event, a jihadist organisation were to claim responsibility for the forest fires," the website says. "You can hardly begin to imagine the level of fear that would take hold of people in the United States, in Europe, in Russia and in Australia."

With the nation heading into another hot, dry summer, Australian intelligence agencies are treating the possibility that bushfires could be used as a weapon of terrorism as a serious concern.

Interestingly, it's not the first time that setting forest fires was attempted as a weapon of terror. In World War Two, the Japanese launched more than 9,000 incendiary balloons across the Pacific designed to set the northwest ablaze, but most did little damage.

However, the technical problems inherent with hydrogen balloons haphazardly floating 5000 miles on the Jet Stream would not exist for resident jihadist Muslims with pockets full of matches, and Washington has been importing plenty of unfriendlies, just like Australia. (See Daniel Pipes informative list of terrorist arrests: The West's Islamist Infiltrators.)