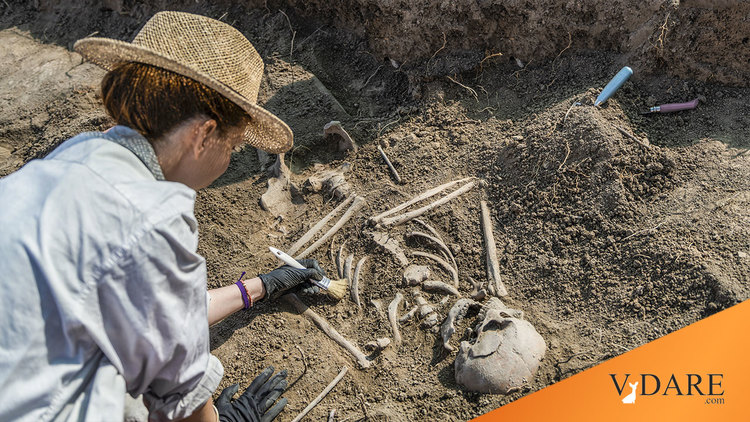 FORENSIC ANTHROPOLOGY: Forensic Anthropologists Might Not Be True Believers In Race Does Not Exist!

Forensic anthropologists are the physical anthropologists with calipers (that most evil of all scientific instruments) who are called in by the cops to determine the sex and race of the skeletons of murder victims found in shallow graves in the woods.

Even though in theory that shouldn’t work, because, as we all have been told repeatedly, Race Does Not Exist Biologically, in practice, forensic anthropologists are pretty good at their jobs.

From Forensic Anthropology, a paper complaining that forensic anthropologists don’t really believe that Race Does Not Exist. Instead, forensic anthropologists have mostly stopped using the word “race” and started using the word “ancestry,” but “virtually no studies considered the possibility that skeletal variation reflected embodied social inequity.” After all, isn’t it obvious that blacks tend to have proportionally longer lower leg bones due to, uh, redlining?

Assumed Differences; Unquestioned Typologies: The Oversimplification of Race and Ancestry in Forensic Anthropology

Abstract
Forensic anthropologists traditionally estimate “race” or “ancestry” as part of the biological profile. While practitioners may have changed the terms used to describe regionally patterned human skeletal variation, the degree to which they have altered their typological approaches remains unclear. This study analyzed 119 peer-reviewed forensic anthropology articles published in four relevant journals (1966–2020) by matching combination(s) of the key words “race,” “ancestry,” “ethnicity,” and/or “population affinity.” Results indicated that while “ancestry” has supplanted “race,” this change has not brought concurrent modifications in approach, nor deeper scrutiny of underlying concepts. “Race” and “ancestry” were infrequently defined in 13% and 12% of sampled articles, respectively, and a plethora of social, geographic, and pseudoscientific terms persisted. Forensic anthropologists increasingly engaged with questions addressing the forces patterning human biological variation: 65% of studies postdating 1999 discussed population histories/structures and microevolution; 38% between 1966–1999. Fewer studies contextualized or critiqued approaches to analyzing population variation (32% of studies postdating 1999; 4% from 1966–1999), and virtually no studies considered the possibility that skeletal variation reflected embodied social inequity (5% of studies postdating 1999; 0% from 1966–1999). This lack of interrogation and clarity contributes to the faulty notion that all forensic anthropologists share similar definitions and leads to an oversimplification of complex biocultural processes. While the lack of definitions and biocultural engagement may be partly due to editorial and peer-review pressures, it is likely that many forensic anthropologists have not interrogated their own perspectives. This article holds that it is essential for us to do so.

Thus, “many forensic anthropologists have not interrogated their own perspectives” (probably because they are more focused on identifying the victims to help the police interrogate the, you know, murderers).