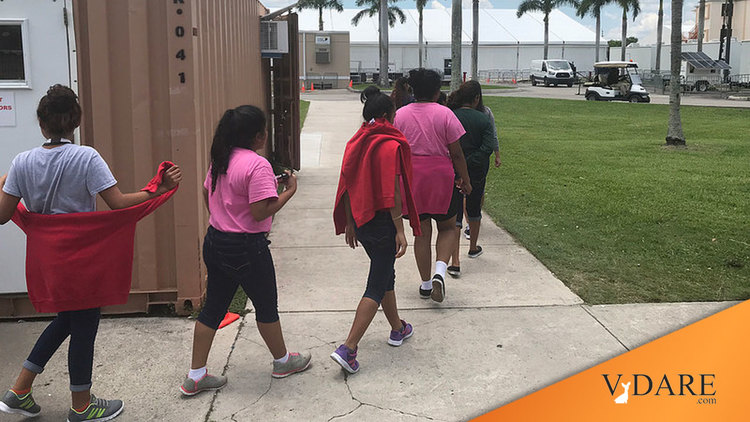 For The Record: Not All "DACA" Brats Were "Brought" To The U.S.; Some Invaded Under Their Own Steam

Deferred Action for Childhood Arrivals [DACA] is the flagrantly lawless administrative amnesty of ”young” (up to age 31, as of mid-2012!) illegal aliens foisted upon the nation in 2012 by The Little Prince (aka ”President Pants-on-Fire”).   The criteria for DACA eligibility are listed in a document, Deferred Action for Childhood Arrivals, archived by the Department of Homeland Security:

You may request consideration of deferred action for childhood arrivals if you:

Note qualification #2!  They didn’t have to be ”brought.”

I raise this point because VDARE.com’s A.W. Morgan got this point wrong in his October 6 blog post that reported welcome news: Finally, A Win For The Historic American Nation; DACA’s Days Might Be Numbered.  He summarized DACA as ”the Obama Regime’s illegal Amnesty that permitted illegal-alien kids, brought to the United States ’through no fault of their own,’ to stay in the country.”  Emphases added.

Interestingly, Wikipedia—horribly biased on political subjects but generally reliable when dealing with straightforward legal language—gets it wrong, too:

Deferred Action for Childhood Arrivals, colloquially referred to as DACA, is a United States immigration policy that allows some individuals with unlawful presence in the United States after being brought to the country as children ...

The language is important.  DACA was peddled as relief for a sterling crew of valedictorians, military heroes, and other geniuses, caught up in a heartless immigration-system’s maw.  But those were merely a few oddballs in sea of about 800,000 ordinary mopes that also includes a generous sprinkling of individuals like the one Jessica Vaughan of the Center for Immigration Studies wrote about in Criminal Alien ”DREAMer” Assaults ICE Agent, Gets Released on Prosecutorial Discretion (July 20, 2012).  Read that and grind your teeth.