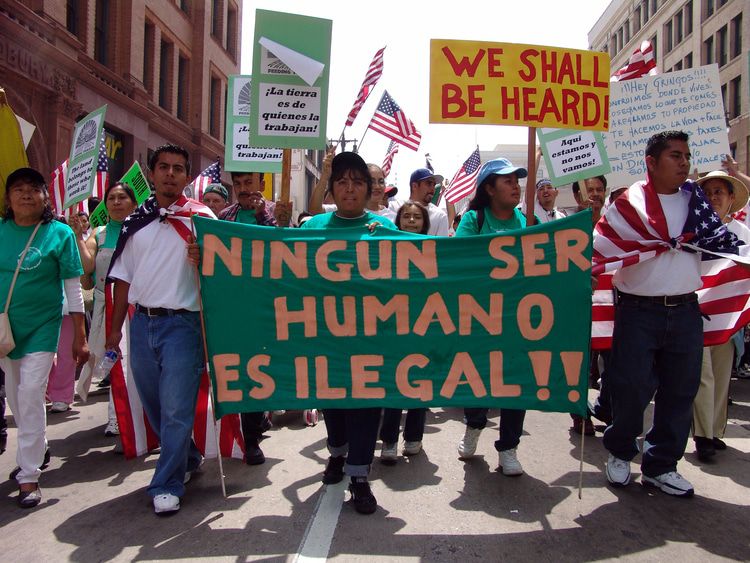 H/T One Old Vet for drawing my attention to Amnesty Ends the American Dream by Daniel Greenfield Frontpagemag.com January 28, 2014

This fluent and powerful essay is notable for really understanding the present situation:

To quote the Bureau of Labor Statistics report, “The unemployment rates for foreign-born blacks, Asians, and Hispanics were lower than for their native-born counterparts…

Talk to anyone who employs illegal aliens and that discrepancy between foreign-born minorities and native-born minorities stops being a mystery. They prefer first generation minority immigrants to second generation immigrants because they consider them more obedient, docile and responsible.

Like a man who keeps divorcing and remarrying every few years, they constantly want fresh immigrants, but they don’t want to hire their American-born children. And so the social welfare system becomes a dumping ground for the children of cheap labor immigrants and the businesses head somewhere else to escape the taxes voted in by that second generation

Daniel Greenfield, although the FrontPage Mag blurb on him rather meanly does not say so, blogs as Sultan Knish. Vdare.com has cited his work numerous times, most recently in Brenda Walker’s Brooklyn's Immigration Colonization Is Observed discussing the Muslim conquest of parts of that unfortunate Borough.

Let's compare two countries side by side. Country A has a sizable middle class and economy, social welfare benefits and a low birth rate. Country B is a failed state where thugs run amok in the street, a few families control the economy and the birth rate is off the charts…

Since Country B's workers want the social welfare benefits, they move to Country A. Country A ends up with a huge failed state population and dramatically increases its social welfare spending for them. Bankruptcy threatens, but change is almost impossible because the pro-social welfare benefits party has become very hard to beat. The pro-reform parties no longer tackle immigration, but try to get the immigrant vote. Their reforms turn into band aids. Country A slides toward the abyss. Country B continues shipping more immigrants every year who remain loyal to its culture and religion.

A perfect accounting for Mexifornia.