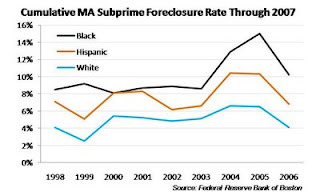 A variety of evidence has long pointed toward minorities accounting for a disproportionate fraction of the defaulted subprime mortgage losses that set off the economic crash. This would hardly be surprising since the government pushed hard to increase lending to minorities of marginal creditworthiness in the name of increasing minority homeownership.

But, like the guns of Singapore in 1941, the government's statistics-collecting apparatus is designed only to make sure that minorities are getting enough loans, not to count how often they default on their mortgages. So, we've been lacking direct data on foreclosure rates in the current Housing Bubble.

Back in October, my reader Tino calculated from the Home Mortgage Disclosure Act database that minorities got half the subprime cash (for home purchases and refinancings) handed out in the big years of 2004-2007. Mortgage dollars (prime and subprime) for home purchases leant to Hispanics went up 691% from 1999 to 2006 and 397% for blacks (but only 218% for Asians and about 100% for whites).

But, what about foreclosure rates?

Two economists at the Federal Reserve Bank of Boston, Kristopher S. Gerardi and Paul S. Willen, have published an important paper, "Subprime Mortgages, Foreclosures, and Urban Neighborhoods," which provides a solid indication. For the state of Massachusetts, they laboriously matched up federal Home Mortgage Disclosure Act data with country registrar data, which can tell them if the property wound up in foreclosure.

This paper analyzes the impact of the subprime crisis on urban neighborhoods in Massachusetts. The topic is explored using a dataset that matches race and income information from HMDA with property”level, transaction data from Massachusetts registry of deeds offices. With these data, we show that much of the subprime lending in the state was concentrated in urban neighborhoods and that minority homeownerships created with subprime mortgages have proven exceptionally unstable in the face of rapid price declines. The evidence from Massachusetts suggests that subprime lending did not, as is commonly believed, lead to a substantial increase in homeownership by minorities, but instead generated turnover in properties owned by minority residents. Furthermore, we argue that the particularly dire foreclosure situation in urban neighborhoods actually makes it somewhat easier for policymakers to provide remedies.

They go on to write:

Here's data based on their Table 3:

Keep in mind that these are cumulative foreclosure percentages up into 2007, with the year representing their "vintage." Normally, you would expect cumulative foreclosure percentages to decline as you get closer to the present since, say, a 2005 vintage mortgage has had less time for bad things to happen to the borrower than a 1999 vintage mortgage. But we see instead a rising cumulative rate peaking in 2004-2005. (And the 2006 ones will probably end up about as bad, or even worse, as the two previous years once their teaser provisions reset after a couple of years.)

So, in Massachusetts, the Non-Asian Minority foreclosure rate on subprime mortgages was about twice the white rate. If that ratio holds true nationally, where minorities took out half the subprime dollars, then minorities would account for two-thirds of all defaulted subprime dollars. (However, Asians probably have a lower default rate, although they largely stayed away from subprime mortgages, so it's not a big issue — so, call it five-eighths).

In reality, what was truly disastrous was not total defaulted dollars per se but unexpected defaulted dollars. The financial industry expected a certain level of defaults each year due to family tragedies and the like, but they stupidly did not expect a systemic disaster from the government's efforts (e.g., President Bush's 2002 call to add 5.5 million minority home owners by 2010) to push minorities into home ownership.

Granted, Massachusetts is not the most representative of states. Still, this data seems to roughly fit what we see elsewhere in terms of where the foreclosures happened. So, it now appears likely that a sizable majority of the unexpectedly defaulted subprime dollars were lost on properties owned by minorities.