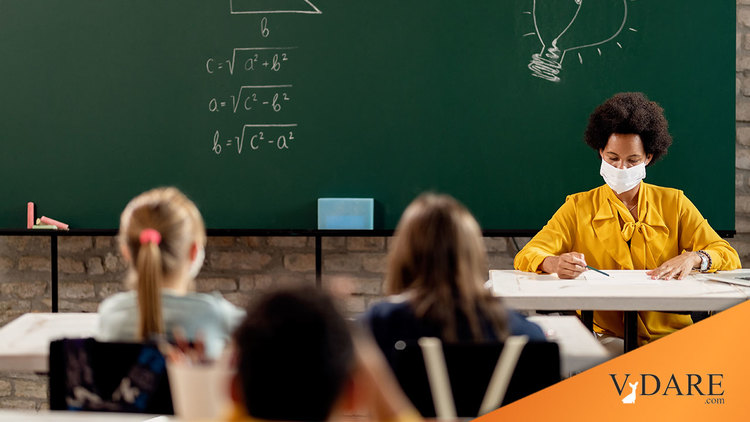 Who are we kidding at this point? That’s a universal statement nearly documenting all the insanity underway across the carcass of Western Civilization.

The Mankato School Board voted earlier this month to allow the district to intentionally place BIPOC teachers in the same work environment — effectively segregating their workforce.

The Mankato School Board voted unanimously earlier this month for a policy that may grant additional pay exclusively to non-white teachers.

The board is chaired by Jodi Sapp, who previously came under fire for requiring concerned parents to dox themselves in order to comment on school matters. Under her leadership, the board voted to amend district policy so that non-white teachers only may receive “additional stipends” to become mentors to other non-white colleagues. The new policy will also have the district “placing American Indian educators at sites with other American Indian educators and educators of color at sites with other educators of color.”

These new measures are designed to “increase opportunity for collegial support” for BIPOC teachers, boosting the district’s retention rate among these demographics.

Critics have pointed out that the latter of the district’s new policies, which will have administrators placing teachers in work environments based on their race, looks a lot like segregation. Board members explained that this is not segregation, though, before the vote took place.

“When you’re one [minority] of a [white] majority it can be very isolating and lonely. To have a support system in place for them is not to segregate them, it is absolutely to support them,” member Erin Roberts said. “It’s not about trying to throw the few [BIPOC] individuals we have into one building. It’s about showing them they aren’t alone.”

“It creates global citizens at the end of the day,” Vice Chair Kenneth Reid added, speaking on the new policies.

These new measures are not without opponents. State Rep. Jeremy Munson criticized the new policy. “Our largest local school district just voted to pay people differently, not on merit, or by the content of their character, but based solely on the color of their skin,” he said, referring to the additional financial incentives available only to non-white teachers.

The Mankato School Board didn’t come up with this policy on its own. Rather, the board adopted the new language from Minnesota statute 122A.70, which commands that “school districts must develop teacher mentoring programs” and that districts may offer “additional stipends as incentives to mentors of color or [those] who are American Indian.”

Notably, the state law says districts “must” develop mentoring programs that “may” include race-based stipends. This means Mankato could have chosen to simply create teacher mentoring programs to boost staff retention without including a racial element.

In 2021, the ruling elite believes whiteness means you must be castigated.

In 2021, the ruling elite believes non-whites (being BIPOC) means you must be rewarded.

This is how white privilege is overcome.