At a time when belt-tightening is a necessary strategy for many states, the number bankrolling educations for illegal aliens is increasing: now 15 states are wasting taxpayer funds on foreigners when many citizens could use a hand.

Do these states have too much money? Or perhaps their priorities are all screwed up, in the liberal style.

Here in California, Sacramento instituted in-state tuition in 2001 for anyone, regardless of immigration status, who attends a state high school for three years and graduates.

Gov. Jerry Brown and his Mexifornia legislature were thrilled to pass a state version of the DREAM Act in 2011 to divert taxes to the big-government future Democrats. The process was ugly to behold: liberal pols bragged about their virtue and generosity for spending other people’s money on other countries’ citizens.

In fact, 20,000 illegal aliens signed up for state financial aid last year when the subsidy first became available. it is estimated to cost $65 million annually by 2017.

Below, a diverse crowd attended a financial aid session at Mission High School in San Francisco where attendees learned how illegal aliens can mooch thousands of dollars from unwilling taxpayers and take slots that should go to citizen young people. 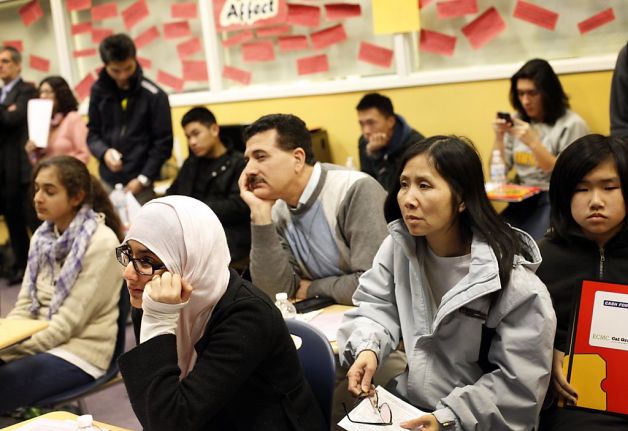 The Associated Press story was careful not to speak unkindly of the alien scholars, subtly noting at the end that “their future work prospects are limited” — meaning they cannot be legally employed following their expensive-to-taxpayers college educations.

Tello spent much of his childhood in the U.S. without legal permission after his parents moved from Peru when he was 6.

That changes if he re-enrolls this fall, as he plans, thanks to a law recently signed by New Jersey Gov. Chris Christie that provides in-state tuition to immigrants like him.

Supporters of immigrants’ rights are energized because after years of contentious fights, New Jersey and three other states passed statutes last year that will allow such students who came to the U.S. when they were minors to pay in-state tuition.

Fifteen states now have such a statute, said Ann Morse of the National Conference of State Legislatures. In addition, university boards in Hawaii, Michigan and Rhode Island have granted these students in-state tuition. To qualify, high school graduates typically must meet requirements such as living in a state for a set number of years. END_OF_DOCUMENT_TOKEN_TO_BE_REPLACED