Doubtless Governor Jerry Brown received hundreds of thousands of messages, if not more, from citizens strongly condemning the Democrat legislation to give tax money to illegal alien college students. But he campaigned on the issue, so his decision to sign the bill into law is not surprising. Neither is Jerry’s disinterest in voter opinion, since state electorate is allergic to voting.

Earlier reports put the dollar cost at over $40 million annually, but curiously today that figure has been whittled down to $13 million in the press.

Interestingly, the San Francisco Chronicle story linked below included a revisit with an earlier sob story example of a struggling illegal alien student, one Alejandro Jimenez, who was forced by cruel circumstance to mooch freebies at local food banks. (See Illegal Alien Che Fanboy) He now bemoans having nearly $10,000 in student loans, but is nevertheless planning to attend graduate school. However, his major is Ethnic Studies, so he can’t be too interested in making money, unless of course he lands a cushy gig at the top of some Raza organization working against the interests of America.

Below, Alejandro Jimenez shows his marxist allegiance on the walls of his dorm room. 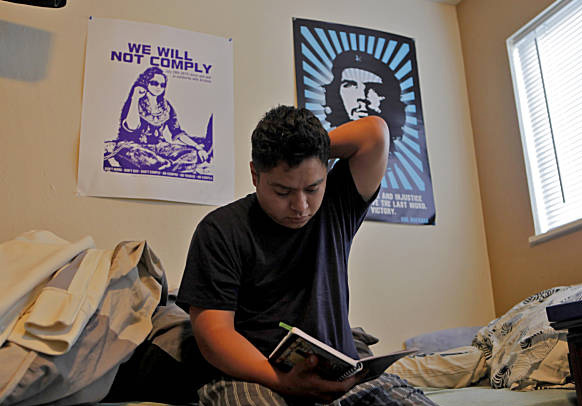 Thousands of California students in the country illegally will be eligible to receive state financial aid to attend public colleges, as Gov. Jerry Brown signed legislation Saturday known as the California Dream Act.

But Brown ducked a costly legal battle over affirmative action by vetoing a bill that would have let California’s public universities consider an applicant’s race and sex in admission decisions.

“I wholeheartedly agree with the goal of this legislation,” Brown said in his veto message of SB185. But because of Prop. 209 – the 1996 constitutional amendment approved by California voters that outlaws “preferential treatment” on the basis of race, sex, color, ethnicity or national origin in public employment, education or contracting – Brown said the courts, not the Legislature, should decide if changes can be made.

The decisions came as the governor continued to work through the hundreds of bills passed by the Legislature at the end of the session last month, including vetoing other measures dealing with charter schools and measurements of student performance. He has until midnight tonight to complete his work on 142 remaining bills.

The California Dream Act – AB131 – has been one of the most-watched bills on the governor’s desk. The law, which takes effect in 2013, still must be approved by the UC regents, but they are expected to support the measure.

Opponents favoring stricter immigration laws are warning that they will try to block the measure through a referendum on next year’s ballot.

But undocumented students themselves cheered the news that they will be eligible to get financial help to attend the state’s public colleges and universities.

“Yeah!” exclaimed UC Berkeley student Gabriela Monico, who came from El Salvador at 15 in 2005. “I’m really excited – not just for me, but knowing that so many other students will be able to qualify for state aid.”

Monico, who joined her father in the United States and overstayed her visa, has paid for Berkeley with private donations and a job where she is paid through a third party. She’s been homeless and has sneaked into campus buildings to sleep.

The California Student Aid Commission, which administers Cal Grants, calculates that 5,462 undocumented students will be eligible for state aid in the 2013-14 school year, at a cost of slightly more than $13 million.

The cost to taxpayers will actually be higher than $13 million in any given year because many undocumented students also will be eligible for a fee waiver at community colleges for very low-income students, and others will qualify for institutional aid provided by CSU and UC.

At UC, that could amount to $4 million or $5 million a year, according to the university’s legislative director, Nadia Leal-Carrillo.

Opponents say the Dream Act will be a nightmare for taxpayers.

“Tuition rates have been going up, the universities have budget cuts of $1.2 billion and there are lotteries for classes – but if someone is here illegally, we roll out the red carpet,” said Tim Donnelly, R-Twin Peaks (San Bernardino County), who serves as vice chairman of the Assembly’s Higher Education Committee.

Out of the shadows

Despite their lack of legal paperwork, the students won’t be hiding in the shadows. Already, such students are required to sign an affidavit saying they are in the process of requesting legal status if they want to pay the lower in-state tuition rate at public universities.

The heads of California’s three public university systems and many campus leaders have expressed strong support for the law authored by Assemblyman Gil Cedillo, D-Los Angeles.

About 100 undocumented students are enrolled at Berkeley, and about 800 across the UC system, UC Berkeley Chancellor Robert Birgeneau said, adding that many such students are brought to this country as children “and didn’t do anything illegal themselves.”

Typically, such students have the hardest time paying for college because they cannot legally be employed, they qualify for no financial aid, and their parents often are not wealthy enough to help.

Jimenez was brought to the United States from Mexico at age 8. Now a senior majoring in ethnic studies, he expects to owe nearly $10,000 by the time he graduates next spring. Though he wants to go to graduate school, “the hustle of finding money, like, burns you out,” he said. “It’s affected my grades.”

But Dream Act opponents such as Donnelly are unmoved by such tales. Students like Jimenez “may be a lot of things – deserving or have a heart-wrenching story,” Donnelly said. “But they are not legally here.”

Brown’s veto of SB185 ended weeks of drama and speculation about whether affirmative action would again become a factor in UC college admissions.

“I’ll be darned,” said Ward Connerly – the former UC regent who authored Prop. 209 and has championed similar anti-affirmative action laws in several other states. “I really was just praying. I think we’ve saved a lot of money and headache.”

Connerly said he was prepared to sue the state if Brown had signed the bill. SB185 would not have negated Prop. 209, but would have let the University of California and California State University systems consider such factors “so long as no preference is given.”

CSU uses grades and test scores alone in admission decisions, so the bill would not have affected them.

But UC relies on 14 factors – from test scores to community service – to determine whom to admit, and university leaders and students alike were hopeful of being able to add race and sex to the mix.

“I’m definitely disappointed,” said Devonte Jackson, a UC Berkeley political science major who had helped rally hundreds of students to flood Brown’s phone lines with messages of support for SB185. “We are still hopeful and we are still thinking about ways we can addresses the issues.”

The governor also vetoed measures that would have added new regulations to charter schools, noting in one veto message that, “Having started two myself, I know whereof I speak.”

Brown started the Oakland School for the Arts and the Oakland Military Institute.
The message came in his veto of AB86 by Assemblyman Tony Mendoza, D-Artesia (Los Angeles County), which would have required charter schools to get signed approval from at least half of the non-teaching staff in order to create and maintain the school.

Another bill vetoed, AB1034 by Assemblyman Mike Gatto, D-Los Angeles, would have mandated that charter schools more closely track the demographic data of students who are admitted.

In addition, Brown rejected measures that would have added more layers to how the state monitors student achievement.

He vetoed SB547 by state Senate President Pro Tem Darrell Steinberg, D-Sacramento, which would have replaced the current Academic Performance Index with a new Education Quality Index. That index would have added additional requirements that Brown called “ill defined and some impossible to design.”

He invoked Albert Einstein and T.S. Eliot in the veto message.

Brown cited the unknown but potentially significant cost in his veto of AB532 by Manuel Perez, D-Coachella (Riverside County), that would have required the tracking of test scores by the different primary languages of students.

Most Cal Grants pay the cost of basic tuition, currently $12,192 at UC, and $5,472 at CSU. To be eligible for state aid to attend UC or CSU, an undocumented student must meet the following requirements:

– Sign an affidavit saying they are in the process of requesting legal status
– Have attended a California high school for at least three years
– Have maintained at least a B average in high school if applying to CSU or UC, or a C average if applying to community college

In addition to the Dream Act, the governor also signed:

– AB438, by Assemblyman Das Williams, D-Santa Barbara, which imposes restrictions on public libraries that seek to privatize. This bill was a priority for labor unions.