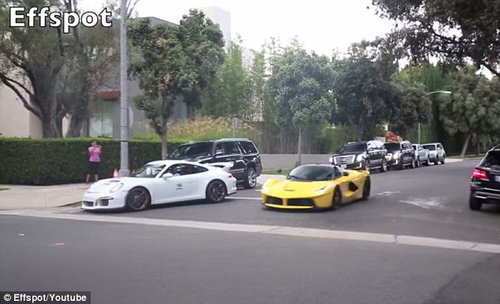 Ferraris With Diplomatic Plates: Another Reason Why Qatar Can't Afford to Help Out Fellow Arab Refugees

Luxury supercars were filmed racing around the residential neighborhood

When confronted by a video journalist he allegedly said ‘F*** America’

By HANNAH PARRY FOR DAILYMAIL.COM

… Others claimed the white Porsche 911 GT3, estimated to be worth $130,400, and bright yellow Ferrari LaFerrari, a hybrid supercar with 950 horsepower, were speeding at more than 100mph and said one of the cars even sideswiped the other.

The race only appeared to end when the engine of the Ferrari, which had a Qatar license plate, began smoking and pulled into the drive of the luxury $10 million, five-bedroom rented home.

A new LaFerrari is worth an estimated $1.4 million but California-based vehicle valuation firm Kelly Blue Brook told NBC4 it could fetch up to $5 million.

Several local residents also complained that the sports car driver had often used their streets as a racetrack – leaving them fearing for their safety.

Neighbors said the drivers were from Qatar and since they moved into area a few months ago, they had seen several sports cars on their driveways.

The people currently living at the 8,895 sqft home in Beverly Hills, which rents for $45,000 a month, where the cars pulled up on Saturday, declined to speak to reporters yesterday.

Video journalist Jacob Rogers said that a man – thought to be the driver – confronted him when he captured the incident on video.

‘He told me verbatim, ‘I could have you killed and get away with it,’ Rogers said.

‘I told him, ‘the press is allowed to be here on the sidewalk on a public street.’ He said, ‘F*** America’ and threw a cigarette at me.’

… ‘The BHPD has zero tolerance for this type of driving which recklessly endangers the public at large.’

It’s probably not a good idea to go out of your way to get the Beverly Hills Police Department angry at you.

It turns out that videos of supercars with Qatari diplomatic plates in Beverly Hills are almost a genre on Youtube: here’s that annoying yellow LaFerrari parked, a nice satin white LaFerrari parked, a Ferrari 458 Italia cruising, and here’s a Ferrari LaFerrari, McLaren P1, and Bugatti Veyron Vitesse Rembrandt Edition parked.

So you can see why, although no doubt the Qatari royal family and their friends would love to do more to help out tragic Syrians, they have to watch their bottom line closely: overhauling that burned-out engine on the yellow supercar isn’t going to be cheap. So maybe, instead, Iceland could be guilt-tripped into taking more refugees?