The mission for the Federal Emergency Management Agency was clear: Hurricane Maria had torn through Puerto Rico, and hungry people needed food. Thirty million meals needed to be delivered as soon as possible.

For this huge task, FEMA tapped Tiffany Brown, an Atlanta entrepreneur with no experience in large-scale disaster relief and at least five canceled government contracts in her past. FEMA awarded her $156 million for the job, and Ms. Brown, who is the sole owner and employee of her company, Tribute Contracting LLC, set out to find some help.

Ms. Brown, who is adept at navigating the federal contracting system, hired a wedding caterer in Atlanta with a staff of 11 to freeze-dry wild mushrooms and rice, chicken and rice, and vegetable soup. She found a nonprofit in Texas that had shipped food aid overseas and domestically, including to a Houston food bank after Hurricane Harvey.

By the time 18.5 million meals were due, Tribute had delivered only 50,000. And FEMA inspectors discovered a problem: The food had been packaged separately from the pouches used to heat them. FEMA’s solicitation required “self-heating meals.”

“Do not ship another meal. Your contract is terminated,” Carolyn Ward, the FEMA contracting officer who handled Tribute’s agreement, wrote to Ms. Brown in an email dated Oct. 19 that Ms. Brown provided to The New York Times. “This is a logistical nightmare.” [More, emphases added] 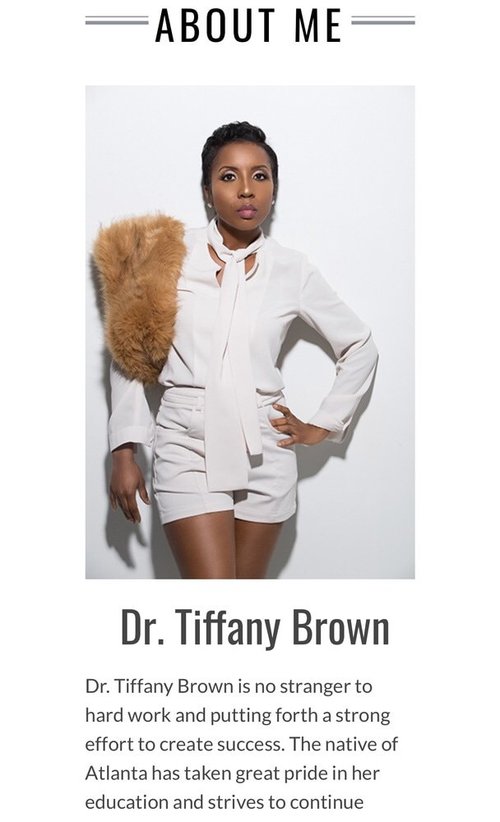 Given Ms. Brown’s name, city, and success at “navigating the federal contracting system”, we can guess at her race, but we don’t have to. It’s Dr. Brown, and she’s pictured right.

Race is relevant here not only because it always is, but because the Federal government has a policy of favoring minority- and women-owned contractors—occasionally, as in this case, with disastrous results.

From her bio at TiffanyCBrown.com [archive link, emphases added]

Dr. Tiffany Brown is no stranger to hard work and putting forth a strong effort to create success. The native of Atlanta has taken great pride in her education and strives to continue broadening her knowledge. Graduating with a degree in Political Science from the prestigious Spelman College in 2001, a Master’s degree in Public Administration from Clark Atlanta in 2004 and also a Doctorate in Public Policy from Walden University in 2009, Dr. Brown earned these achievements through determination and the desire to achieve her goals.

If Dr. Brown takes great pride in her education, she’s been lied to—Spelman and Clark are black colleges, which may have graduated some great scholars back in the Jim Crow days, but now tend to get what white colleges won’t take—and white colleges are desperate for black students.

Walden, where she got her doctorate, is an online college which is "under heightened cash monitoring from the US Department of Education".

There's a lot of affirmative action in the Atlanta area.

Upon Graduation from Walden University, she has truly impacted change as an academic and practitioner. Dr. Brown is a former 2009 Write-in Atlanta Mayoral Candidate and owner of 3 companies:

Dr. Brown, who is also a motivational speaker, is clearly over her head in business. She seems to be a practitioner of the "leap, and the net will appear" theory—which sometimes works for the person who leaps, but here seems to have left a number of Puerto Ricans going hungry.

The New York Times used its resources, contacts, and professionalism to get this story—and then couldn't print the most important thing about it.

This is supposed to be Trump's fault, not 50 or 60 years of Federal Affirmative action. Well, if Trump wants to drain the swamp, he's not going to do it with "minority owned government consulting firms".