Here's another bogus backlash story from the permissive, open-borders-loving press. A convicted cop killer gets a cushy sentence of life in prison and the MSM are worried that the case might cause citizens to reflect negatively on the crimes committed by illegal aliens.

Quintero was in the country illegally when he killed Johnson. He’d already been deported once after he was convicted for indecency with a child.

Rafael Perez, a Houstonian who became a naturalized U.S. citizen Wednesday, said he worried the verdict would negatively affect other immigrants.

”People are going to think that people who are trying to do things the correct way, that they shouldn’t have a citizenship,” Perez said. [Could the Quintero verdict have damaging effects for immigrants?, By Courtney ZubowskiÂ  KHOU-TV, May 21, 2008]

How often do you hear conflation paranoia so elegantly voiced?! Anyway, it’s the press that has a hard time differentiating between legal and illegal immigrants, not the public.

Meanwhile, the stone-cold killer is surprised at his good fortune:

Almost two years ago, Juan Leonardo Quintero predicted in a jail house interview that he would be sent to the death chamber for shooting Houston police officer Rodney Johnson.

"I was wrong," he said Wednesday from a Harris County jail a day after he was sentenced to life in prison without chance of parole. [Quintero didn't expect to be spared after slaying, By Rosanna Ruiz And Brian Rogersm Houston Chronicle, May 21, 2008

The article included informative statistics about the frequency of the death penalty against cop killers in Harris County.

A death sentence should be understood by criminals as automatic for murdering an officer. Otherwise the job of police will become even more hazardous than it already is.

Below, cop-killer illegal alien Juan Quintero at the time of an early court appearance (left) and after his trial make-over (right). It's amazing what defense attorneys can do. 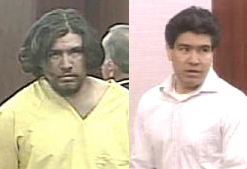