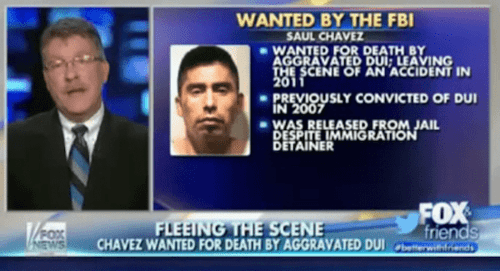 Anyone familiar with the ongoing problem of illegal alien crime knows that the July 1 murder of Kate Steinle in San Francisco by a Mexican drug dealer was not an anomaly. Such mayhem is common: what’s uncommon is national attention by the media to the preventable crimes caused by immigration non-enforcement.

Former FBI agent Ron Hosko appeared on the morning Fox News show Friday with a few mug shots of illegal aliens who need capturing — in fact, some need recapturing after being released by the stupid-generous government. He noted that there are “three illegal aliens currently on the FBI’s ten most wanted list.”

BRIAN KILMEADE: Let’s go and move on to Saul Chavez where’s he’s wanted for the death — this happens a lot too — a death by aggravated DUI, leaving the scene of the accident, 2011.

RON HOSKO: Right, this was a tragic case. There were witnesses who believed that this 66-year-old victim could have survived had he just been hit by that car, and in fact Chavez is believed to have drug the victim for several hundred feet, was run down and caught by Chicago police, locked up. ICE had actually placed a detainer on this individual. He later got bond; his his family paid the bond; it was $25,000 and he walked free never never to return. My understanding is the family is suing the Cook County Sheriff for just that action.

KILMEADE: Yeah, they should sue the sheriff and they should sue the federal government. One time should be enough. He shouldn’t be here to begin with you do something like that in 2007, then you get out and kill again. Absolutely incredible. [. . .]

So these people, all illegals, but can we call them illegals?

HOSKO: Well, we can. My understanding is each of these people were in the country illegally at the time of these crimes, and then they of course fled the jurisdiction by their flight to . . . whether its Central America is the most common location for our fugitives, or Mexico, making it immeasurably more difficult for the FBI or other law enforcement to capture them. There are hundreds or thousands are these across the country and that’s where police can identify someone for the crime.

Why does an illegal alien accused of killing a man ever get bail? Does “flight risk” no longer mean anything? 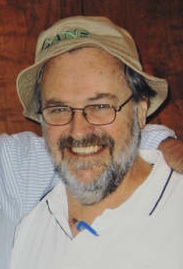 I reported on Saul Chavez a couple years ago because it was a very bad case, including a DUI-convicted illegal alien released to drive Chicago streets and a local government completely abrogating its responsibility for public safety.

Illegal alien Chavez had already been convicted of one DUI, but Cook County Illinois let him free to kill Denny McCann (pictured) in June 2011. Chavez was blotto drunk (.29 blood alcohol) when he ran down and dragged McCann to his death. The criminal-friendly Cook County Board then decided it would be better to release dangerous foreign criminals rather than protect the public. So after Denny McCann was killed by an illegal alien who should have been deported, Cook County made sure the perp was released.

But as Chavez sat in the jail, immigration became an emotional issue before the Cook County Board. Board President Toni Preckwinkle and Commissioner Jesus “Chuy” Garcia pushed a new policy aimed at ignoring federal detainer requests and allowing suspected illegal immigrants who’d been jailed in misdemeanor or felony cases to make bond.

It passed by a 10-5 vote in September. The political payoff was obvious: It was a Democratic Party appeal to Latino voters over the hot-button issue of illegal immigration.

Preckwinkle and supporters characterized it as a way to save taxpayers money, and she put out figures insisting that it cost $15 million per year to detain suspected illegal immigrants at federal request, without the county receiving reimbursement from the feds. Garcia said it was all about “ensuring the fair treatment of all people.”

When the proposal was debated, the sheriff’s office warned that even those charged with serious crimes could be allowed to flee.

Commissioner Timothy Schneider was perhaps the loudest voice against the policy, warning that criminals would run off to Mexico, and that Cook County would become a laughingstock.

“This is clearly, without exacerbating the situation, our Willie Horton moment here in Cook County,” said Schneider, R-Streamwood.