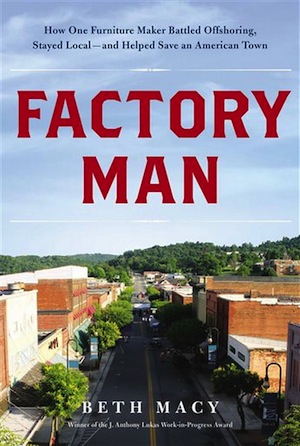 Economic globalization has done terrible damage to this country in its twin manifestations: Outsourcing has removed entire industries to overseas havens of cheap labor, and immigration has lowered wages for businesses that couldn’t be shipped abroad.

We see the long-term effects particularly among the lower classes. A couple generations back, a young person with average skills could go directly from high school graduation to a job at a local manufacturing plant and have a nice life.

That’s nearly all gone, because of factories sent overseas with the government’s help via bogus trade deals like NAFTA that promised no job loss for the US. Later came the assurances that outsourced jobs would be replaced by tech occupations, but those have been largely globalized away as well.

Buchanan has been a major voice warning against dismantling the country’s industrial base for years, but now there is a writer focusing on the crisis by telling the story of one man and one industry in a new book, Factory Man: How One Furniture Maker Battled Offshoring, Stayed Local – and Helped Save an American Town.

NPR had a lengthier report which investigated some of the negotiations that went on between furniture executive John Bassett III and the US Commerce Dept because the Chinese furniture makers were dumping their products in the US, which is prohibited by the WTO:

What’s also interesting is how the Chinese regarded the takeover of the US furniture industries and the ripoff of Bassett’s designs and production techniques not as some natural market-based movement, but as a Red China victory over the despised Americans. Here’s a snip of that section of the 30-minute interview:

How A Factory Man Fought To Save His Furniture Company — Transcript, NPR, July 14, 2014

DAVIES: One of the fascinating things about John Bassett the third, you write, is that he actually wanted to go to China and find the people that were copying the bedroom furniture – the Louis Philippe style bedroom furniture – that he’d done so well with, they were making it in China. He sends his son and somebody else they figured – well, why don’t you tell the story. He ends up over there face-to-face with the guy.

MACY: Sure. There’s a dresser that’s just come on the scene in the American market and it’s a Louis Philippe Dresser. It’s wholesaling for 100 bucks and he can’t figure out how the heck they’re able to sell it. They can’t be making money, he says, he his engineer take it apart and deconstruct it piece by piece and price out the pieces and he knows they have to be dumping – which means selling it for the less than the price of the materials. So he sends his son Wyatt who’s kind of his head business guy, he sends him and a Taiwanese translator who’s a family friend to Dalian, because the sticker on the back only says Dalian China. It doesn’t say exactly which factory it’s from. And he sends them off to do sort of this secret spy mission – they’re pretending that they’re looking to buy but what they’re really looking for is that one particular dresser and they find it. And, you know, after days and days of searching they finally end up in this remote section of the province almost to the border of North Korea and they find it there – and John says, you know, John has told him don’t come home until you find it. And so then once they find out that there’s this law on the books that could allow them to file an antidumping petition he says, I want to get eyeball to eyeball with the guy running Dalian Wafun (ph) which was the company. And so then they travel back there a second time and because he’s the CEO of the company, the gentleman running Dalian Wafun actually meets with him and he has this sort of very chilly one-on-one dialogue with him that’s all translated but the guy says, basically – close your factories – he’s got three factories left at the time – close your three factories and let me make all your furniture for you.

DAVIES: And this guy who was determined to close these American factories and quite blunt about it was also a Chinese Communist Party official, right? He was planning to build this huge complex and just saying, we’re going to eat you alive.

MACY: Right. And that we consider it the translated word, and John remembered it very well, was tuition. He just said it out loud. This is the tuition of us being able to capture your market share, we’re going to sell it so cheap and with government subsidies we’re going to be able to make all of your furniture for you. And then they ended up driving him out to this furniture industrial park out in the country – and there’s just stacks and stacks of timber. And Wyatt said, you know, you didn’t quite know whether to believe it was just a giant billboard expansion where they’ve got the billboard up and they say this huge thing is coming – but when he saw all that Russian timber there laid out they knew they were serious and they knew, like, whoa they were going to war.