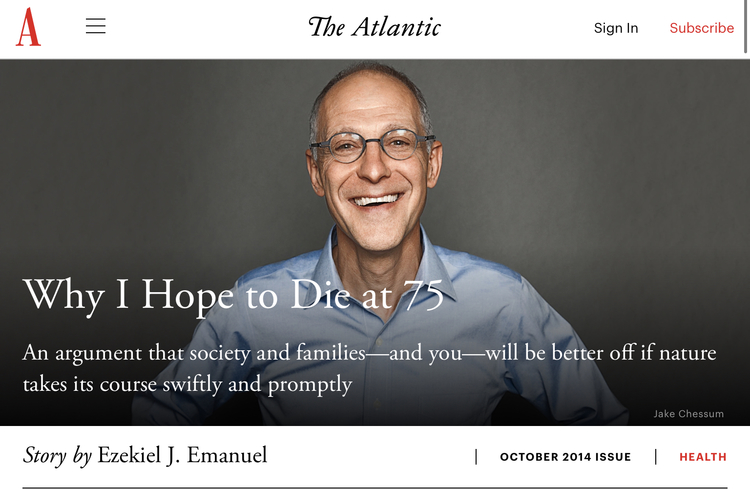 Ezekiel Emanuel: The US Government Should Let Americans Die In Order To Give Scarce COVID Vaccines To Countries Where People Die Young Anyway

Joe Biden recently named bioethicist Ezekiel Emanuel to his COVID council. Emanuel, a member of the energetic Emanuel family that also includes Rahm, former mayor of Chicago, and Ari, the Hollywood agent who is the source for Jeremy Piven’s character on Entourage, is best known for his 2014 article in The Atlantic, “Why I Hope to Die at 75,” in which he announced he would refuse to get a flu vaccination after age 75, because nobody does anything of world-historical innovative significance after 75, so what is the point of living anyway?

Many have therefore expressed concern for elderly COVID victims or for Joe Biden himself, but my suspicion is that Professor Emanuel was not thinking about killing off people like them, but about his own elderly father, the embarrassingly racist retired rightwing terrorist, as I explained in:

Medical Ethicist Ezekiel Emanuel Concocts Grand Kantian Principle About How You Shouldn’t Try to Live Past 75 Out of How Much He Wishes His Dad, the Old Irgun Terrorist, Would Just Hurry Up and Die Already

To Rahm and Ari, condolences. To Ezekiel, congratulations.

Once effective coronavirus disease 2019 (COVID-19) vaccines are developed, they will be scarce. This presents the question of how to distribute them fairly across countries. …

Those who think countries will inevitably engage in “vaccine nationalism” (4) may deem an ethical framework for vaccine distribution among countries irrelevant. Public sentiment in some countries for retaining vaccine developed within their borders is strong, and many governments will also try to obtain vaccines produced elsewhere. But an ethical framework has broad relevance even in the face of nationalist attitudes. Rather than simply asserting that might makes right, governments typically appeal to national partiality: a country’s right and duty to prioritize its own citizens.

Some defend national partiality as ethical. Fellow citizens share “associative ties,” common governmental, civic, and other institutions, and a sense of shared identity. Also, the legitimate authority of representative government officials inheres in their representing and promoting the interests of their citizens. Plausibly, these relations support allowing countries to prioritize citizens over foreigners for vaccines. Others view national partiality as unethical: People’s entitlement to lifesaving resources should not depend on nationality

E.g., during the Gulf War of 1991, Rahm Emanuel, Barack Obama’s first chief of staff, volunteered to serve in the military … in Israel.

Reasonable defenders of national partiality will differ on how much priority countries should give their citizens for vaccines. To establish the need for an equitable international distribution, it is unnecessary to determine an optimal level of priority. It is sufficient to identify a clear upper bound: Reasonable national partiality does not permit retaining more vaccine than the amount needed to keep the rate of transmission (Rt) below 1, when that vaccine could instead mitigate substantial COVID-19–related harms in other countries that have been unable to keep Rt below 1 through ongoing public-health efforts.

The marginal benefit of additional doses of vaccine in a country able to keep Rt below 1 generally will pale in comparison to the potential benefits to countries whose Rt remains above 1—at least until booster vaccination is needed to maintain immunity. Hence, with Rt below 1, there will not be sufficient vaccine-preventable harm to justify retaining vaccine. When a government reaches the limit of national partiality, it should release vaccines for other countries. This makes an account of fair allocation among countries relevant to reasonable national governments.

That sounds all very reasonable, but Tyler Cowen made a good point recently about what we’ve learned fighting this pandemic: it’s hard to come up with a successful moderate response because most of the time you are either winning over it or losing to it. Moderate efforts to finetune responses to keep R-nought just under 1.0 have tended to break down fairly quickly and then soon … uh-oh, here we go again.

Three Fundamental Values
Fairly distributing a COVID-19 vaccine among countries is a problem of distributive justice. Although governments will be the initial recipients of vaccine, fair distribution across countries must reflect a moral concern for the ultimate recipients: individuals. Three values are particularly relevant: benefiting people and limiting harm, prioritizing the disadvantaged, and equal moral concern.

Benefiting people and limiting harm is widely recognized as important across ethical theories. Realizing this value requires defining relevant benefits, measuring them, and assessing the relative urgency—the importance and time sensitivity—of countries’ needs. A successful vaccine produces direct benefits by protecting people against death and morbidity caused by infection. It also produces indirect benefits by reducing death and morbidity arising from health systems overstressed by the pandemic, and by reducing poverty and social hardship such as closed schools.

Prioritizing the disadvantaged is a fundamental value in ethics and global health. Realizing this value requires that vaccine distribution reflect special concern for people who are disadvantaged. Fairly distributing a COVID-19 vaccine internationally therefore requires assessing different types of disadvantage. Are the worst-off countries those experiencing the greatest poverty? Those where people have the lowest life expectancies?

Prioritizing the vaccine to people with the lowest life expectancies is self-evidently silly. Life expectancy before COVID was 54 years in Chad, so why prioritize American vaccines for Chadians so they can die of something else at 54?

Equal moral concern requires treating similar individuals similarly and not discriminating on the basis of morally irrelevant differences, such as sex, race, and religion.

Distributing different quantities of vaccine to different countries is not discriminatory if it effectively benefits people while prioritizing the disadvantaged.

Ending the pandemic in the United States would hugely boost the world economy, which would do a lot of good for people in poor countries around the world. If Americans start going to the mall again, demand for garments made in Bangladesh will go up. In contrast, moderating the pandemic in Chad would have virtually no impact on people in, say, Bangladesh.

To revive the world economy, the most advantaged (i.e., those with the most money to spend) should be prioritized.